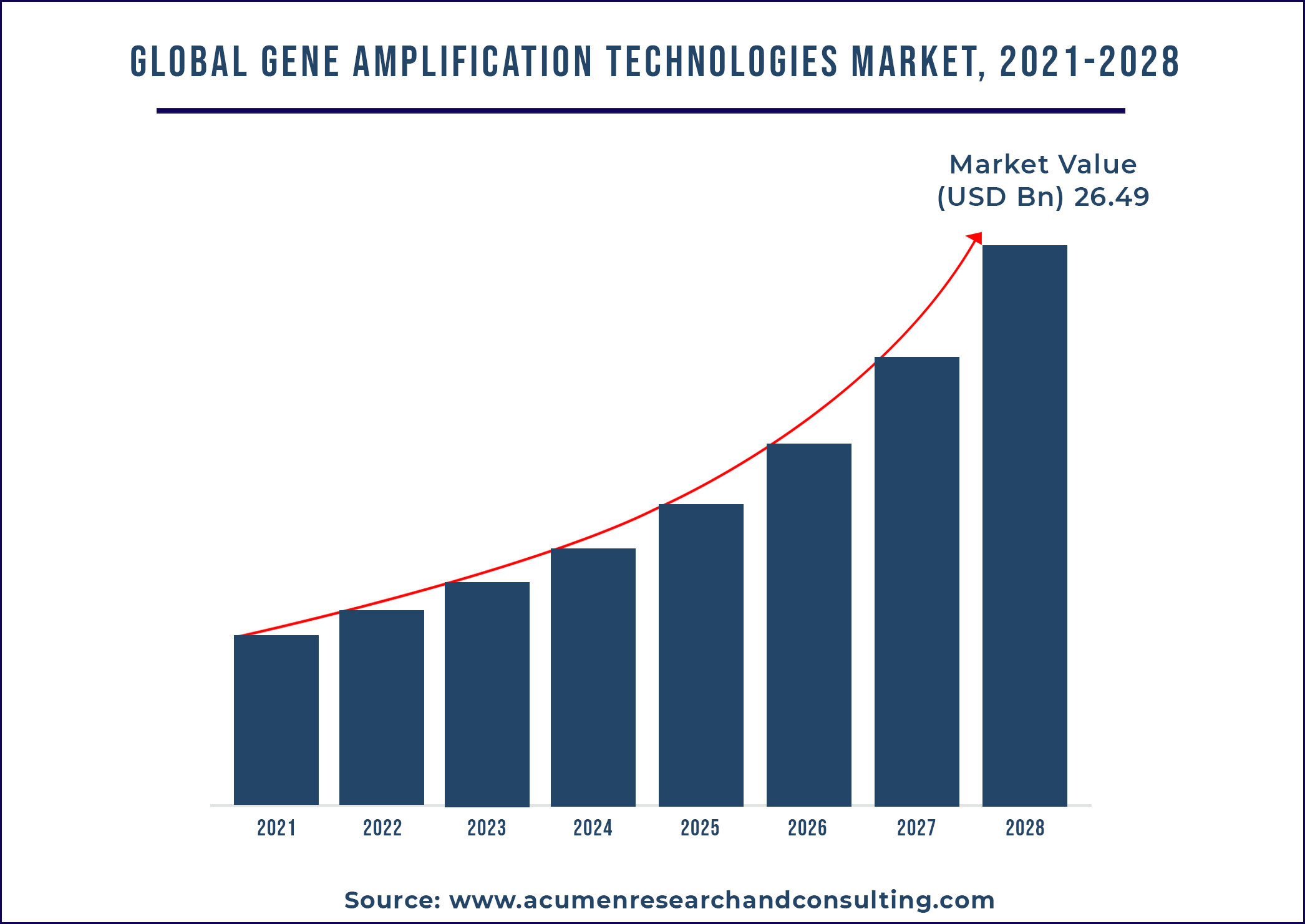 According to the National Human Genome Research Institute, gene amplification is an increase in the number of copies of gene sequence without a proportional increase in other genes. This results from a duplication of a region of DNA that contains a gene through errors in DNA replication and repair machinery. Gene amplification can also be referred to as the polymerase chain reaction (PCR); a laboratory technique used to amplify gene sequences in a test tube, which is in tremendous demand owing to the COVID-19 pandemic. Gene amplification technology plays a crucial role during development when it is responsible for the programmed increase of gene expression.

The global gene amplification technologies market is primarily driven by the Human Genome Project (HGP). The Human Genome Project was a worldwide scientific research project to determine the base pairs that compose human DNA. It was the world’s largest collaborative biological project that started in 1990 and was declared completed in April 2003. However, Level "complete genome" was attained in May 2021.

In addition, growing emphasis on research & development activities in the field of molecular diagnostic, genetic & genomic testing, drug discovery, and environmental monitoring among others are also boosting the global gene amplification technologies market share. For instance, genomic testing is commonly used in cancer treatment to determine the behavior of the tumor. It further helps healthcare professionals to predict how progressive cancer will be and whether it is likely to spread to other body parts. According to the reports, Global Cancer Observatory (GLOBOCAN) and International Agency for Research on Cancer states that an estimated 19.3 million new cancer cases were diagnosed in 2020. Also, cancer is the leading cause of death the world. According to estimates from the World Health Organization (WHO) in 2019, cancer is the first or second cause of death before 70 years in most of the countries in the world.

However, the high costs of these technologies and limited awareness in emerging economies are the factors that might restraint the market from growing. Moreover, technological advancement in the field of advanced DNA multiplication technologies will contribute to profitable opportunities for the market in the coming years.

The molecular diagnostics industry has been playing a vital role in the screening, detection, and monitoring of numerous life-threatening diseases. This industry is quickly evolving and has established itself as a significant part of the healthcare industry. Clinicians have benefited from molecular diagnostic tools such as polymerase chain reaction (PCR), sequencing, and hybridization, as well as microarray, by providing rapid and sensitive approaches for the screening, detection, and monitoring of a wide range of genetic disorders, cancers, infectious, and chronic diseases

Impact of the Covid-19 Pandemic on Gene Amplification Technology Industry

The pandemic has increased the pressure on the sector to handle the issues it faces. The COVID-19 pandemic has tested the healthcare ecosystem of even the most developed economies. With the addition of the quick antigen detection test to the molecular tests, which remain the basis of diagnosis, the testing rate has increased dramatically in recent months. The government's increased focus on testing has expedited the need, demand, and responsibility of the world's diagnostic business, particularly the molecular diagnostic sector, which has proven to be the backbone, supporting containment efforts to minimize the outbreak. 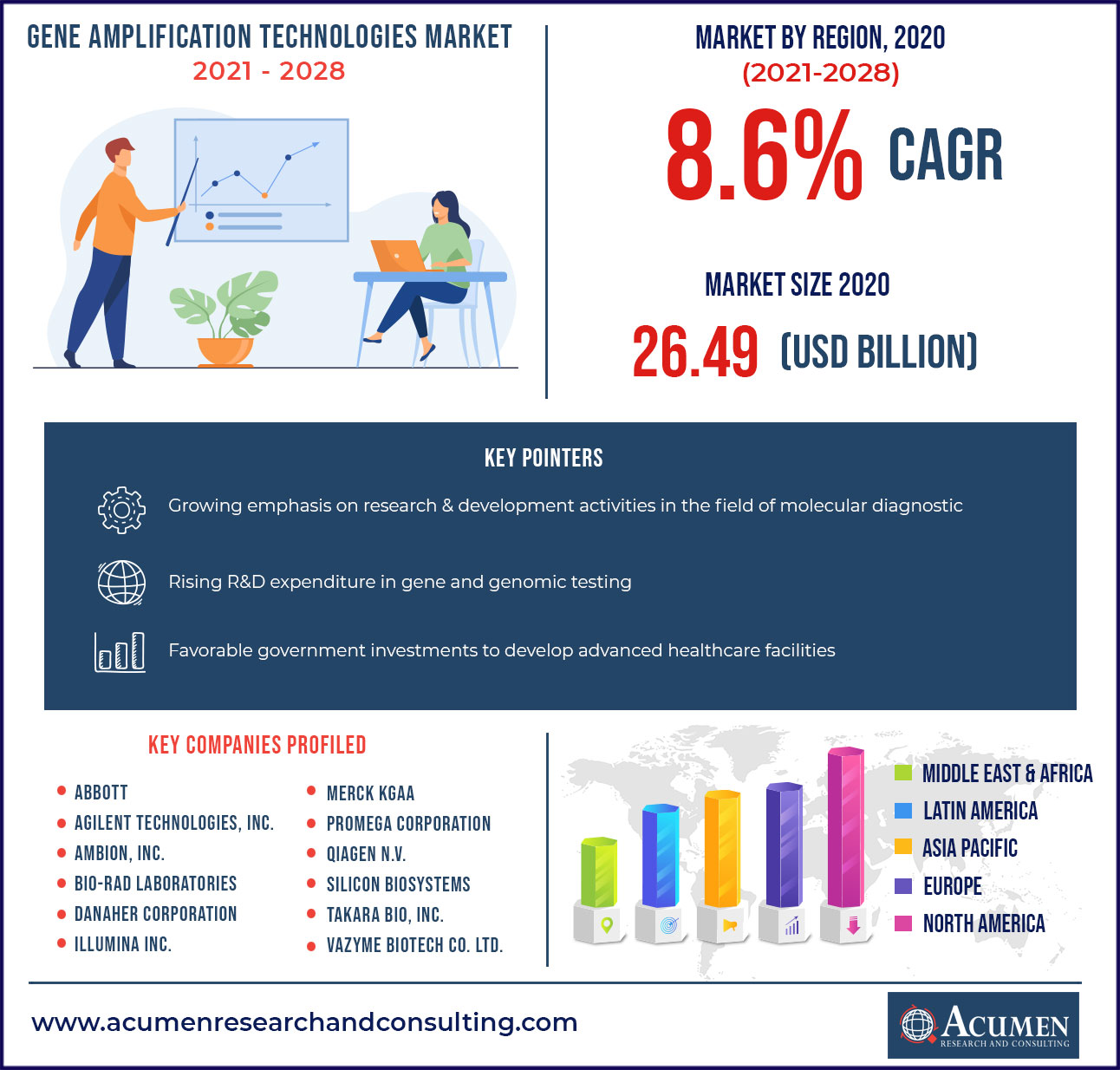 Based on product, the segmentation bifurcates into instruments, kits & reagents, and services. The sample type segment is further categorized into a single cell, FFPE, and others. The application segment is further sub-segmented into whole genome amplification, exome sequencing, SNP genotyping arrays, array CGH, hybridization, and other applications. Furthermore, pharmaceutical & biotechnology companies, academic & research institutes, and others.

Among all the regions, North America generated the highest revenues in 2020, accounting for a significant market share in the global market. This is attributed to the presence of several advanced healthcare facilities, tremendous growth in genetic testing, and ongoing research programs in the region. For instance, in Sept 2021 - GeneDx, Inc. a US-based genomic analysis leader announced the completion of clinical genetic exome sequencing for more than 300000 patients, making the company’s dataset the largest of its kind in the world. Besides, growing funding by numerous government organizations in medical research and its infrastructure is also likely to boost the North American gene amplification technologies market growth.

Europe has also exhibited significant growth in the global market, owing to the growing focus on innovations through R&D, and the presence of advanced healthcare facilities in countries such as Germany, the UK, and others. Meanwhile, the Asia-Pacific region is likely to register the fastest CAGR throughout the forecast period on account of the increasing prevalence of various diseases that lets the growing need in genomic research. Moreover, favorable government initiatives to develop advanced healthcare facilities in countries such as China and India are also expected to propel the demand for the APAC gene amplification technologies market.

How much was the estimated value of the global Gene Amplification Technologies market by 2028?

The estimated value of Gene Amplification Technologies Market Surpass US$ 50.64 Billion By 2028

What will be the projected CAGR for global Gene Amplification Technologies market during forecast period of 2021 to 2028?

The projected CAGR of Gene Amplification Technologies during the analysis period of 2021 to 2028 is 8.6%.

What are the current trends and dynamics in the global Gene Amplification Technologies market?

Growing emphasis on research & development activities in the field of molecular diagnostic, genetic & genomic testing, and drug discovery are the prominent factors that fuel the growth of global Gene Amplification Technologies market

Which region held the dominating position in the global Gene Amplification Technologies market?