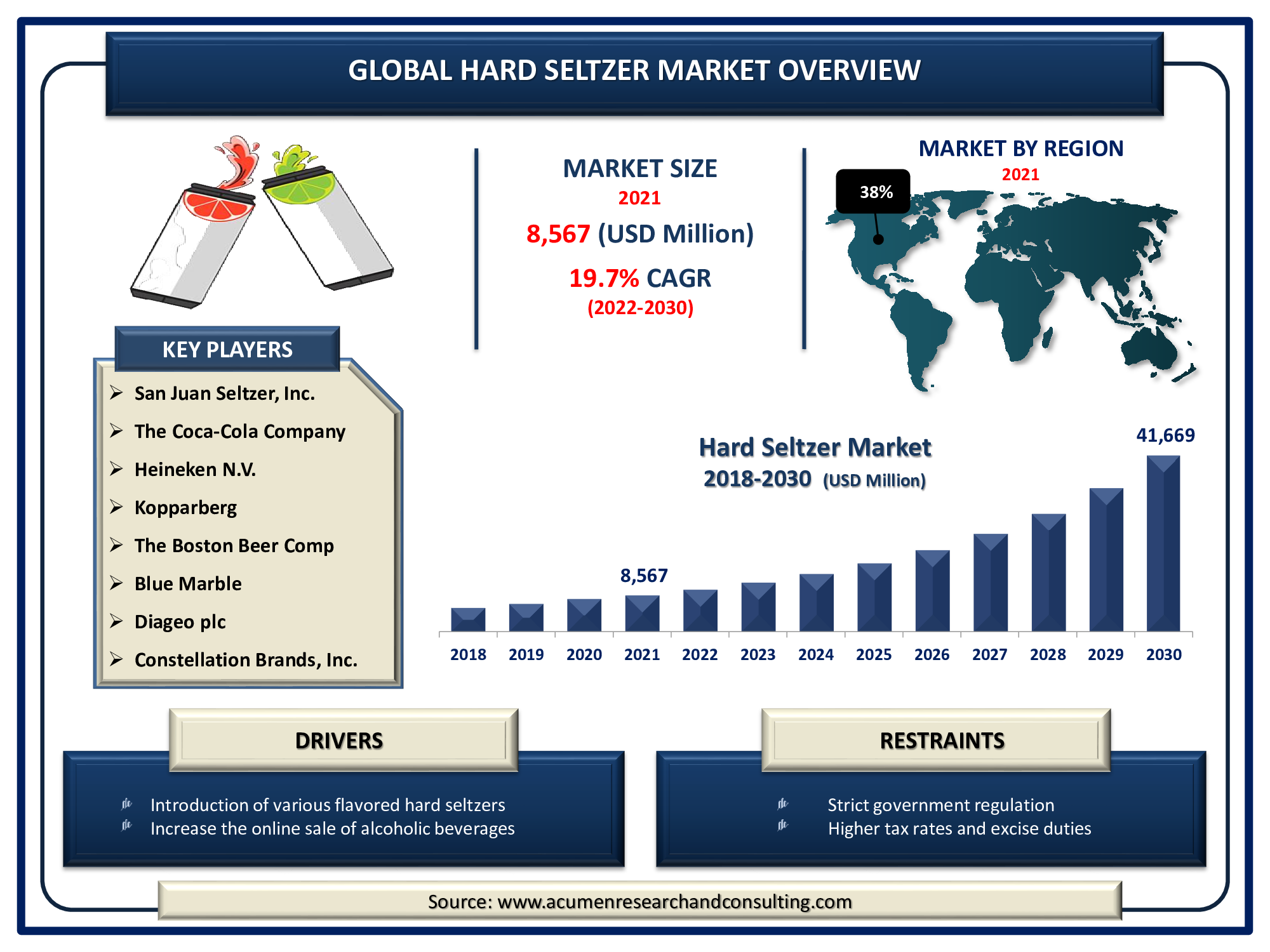 Hard seltzer is a well-known alcoholic drink that integrates flavored fizzy water with alcohol. It's a convenient mixture of alcohol, carbonated water, and fruit flavoring that comes in cans and bottles. Hard seltzer flavors range from the traditional lime, strawberry, black cherry, and ruby citrus fruits to the more elevated peach agave hibiscus, melon basil, and cucumber plum. The alcohol by volume (ABV) of hard seltzer ranges from 4% to 6%, which is comparable to the ABV of most beers. The alcoholic content varies by brand, but also most hard seltzers are made through the fermentation of cane sugar and fruit flavors.

In developed countries such as the United States, Japan, and Australia, demand for low-calorie, low-alcohol, and low-carbohydrate beverages is expected to rise, increasing demand for the hard seltzer market. Furthermore, as people with celiac disease or allergies become more aware of the potential benefits of gluten-free beverages, gluten-free hard seltzer soft drink is growing in popularity among wellness consumers, and gluten-free hard seltzer soft drink has been shown to be beneficial for people suffering from inflammatory and autoimmune conditions.

The global hard seltzer market segmentation is based on ABV content, packaging, distribution channel, and region.

Based on the ABV content, more than 5% is expected to hold a significant market share in 2021. This is primarily due to a shift in consumer preference away from alcoholic beverages like beer, spirits, and wine and toward hard seltzer with more than 5%. Furthermore, hard seltzer with 5% is considered the most appropriate ratio, which is the ingredient ratio that is primarily produced by manufacturers. Furthermore, the premise of moderation is a thriving trend, especially in the United States, which is driving demand over the forecast period. Many players in the alcohol industry are looking to expand their product portfolio of low-alcohol beverages in such categories.

Furthermore, the less than 5% content segment is expected to grow at the fastest rate during the forecast period, owing to an increasing customer focus on health and wellness as people of all age backgrounds try to reduce their alcohol consumption.

Based on packaging, the metal can segment is expected to lead the market in 2021. Metal cans have a greater market share and are continuing to gain market share in the global Hard Seltzer Market. Metal cans are widely used as beverage containers and offer numerous advantages such as durability, convenience, multi-color printing, and environmental stewardship. Furthermore, beverages in metal packaging do not require any active ingredients, do not forfeit their taste and nourishing properties, and retain their unique flavor for an extended period of time.

According to the hard seltzer market forecast, the off-trade segment will dominate the market in 2021. This segment includes all major retailers, including supermarkets, commercial outlets, hypermarkets, convenience stores, and wine and spirit stores. People prefer these distribution centers because they offer significant promotions and discounts. Furthermore, in order to reach as many consumers as possible, the majority of manufacturers launch their product lines through supermarket chains such as Target, Walmart, and others. Furthermore, business owners are significantly increasing off-trade sales of hard seltzer during the pandemic. The closure and benefits of online stores, such as door-to-door delivery and large quantity discounts, are driving significant growth in off-trade sales in the United States and other countries.

North America Is expected to dominate the hard seltzer market in 2021 and is anticipated to do so for the foreseeable future. Consumption patterns for low-calorie, alcohol-free, and gluten-free beverages are propelling the region's hard seltzer market forward. Furthermore, millennial are becoming much more interested in flavored alcoholic beverages, which will drive up demand for hard seltzer over the forecasted time frame. In recent, the hard seltzer company White Claw successfully launched hard seltzer flavors which are lemon, watermelon, and tangerine. Furthermore, with new features and functionality, manufacturers can attract customers while expanding their ecological footprint in international economies. As a result, the North American hard seltzers market share is predicted to grow rapidly in the coming years.

How big was the global hard seltzer market in 2021?

What will be the projected CAGR for global hard seltzer market during forecast period of 2022 to 2030?

Which region held the dominating position in the global hard seltzer market?

North America held the dominating share for hard seltzer during the analysis period of 2022 to 2030.

Asia-Pacific region exhibited fastest growing CAGR for hard seltzer during the analysis period of 2022 to 2030.

What are the current trends and dynamics in the global hard seltzer market?

The increasing rate of alcohol consumption, and soft drink consumption is increasing among younger generations are the prominent factors that fuel the growth of global hard seltzer market.

Based on ABV content, ABV more than 5%segment held the maximum share for hard seltzer market in 2021.