The Global Hemodialysis Catheters Market size accounted for USD 787 Million in 2021 and is estimated to reach the market value of USD 1,214 Million by 2030. 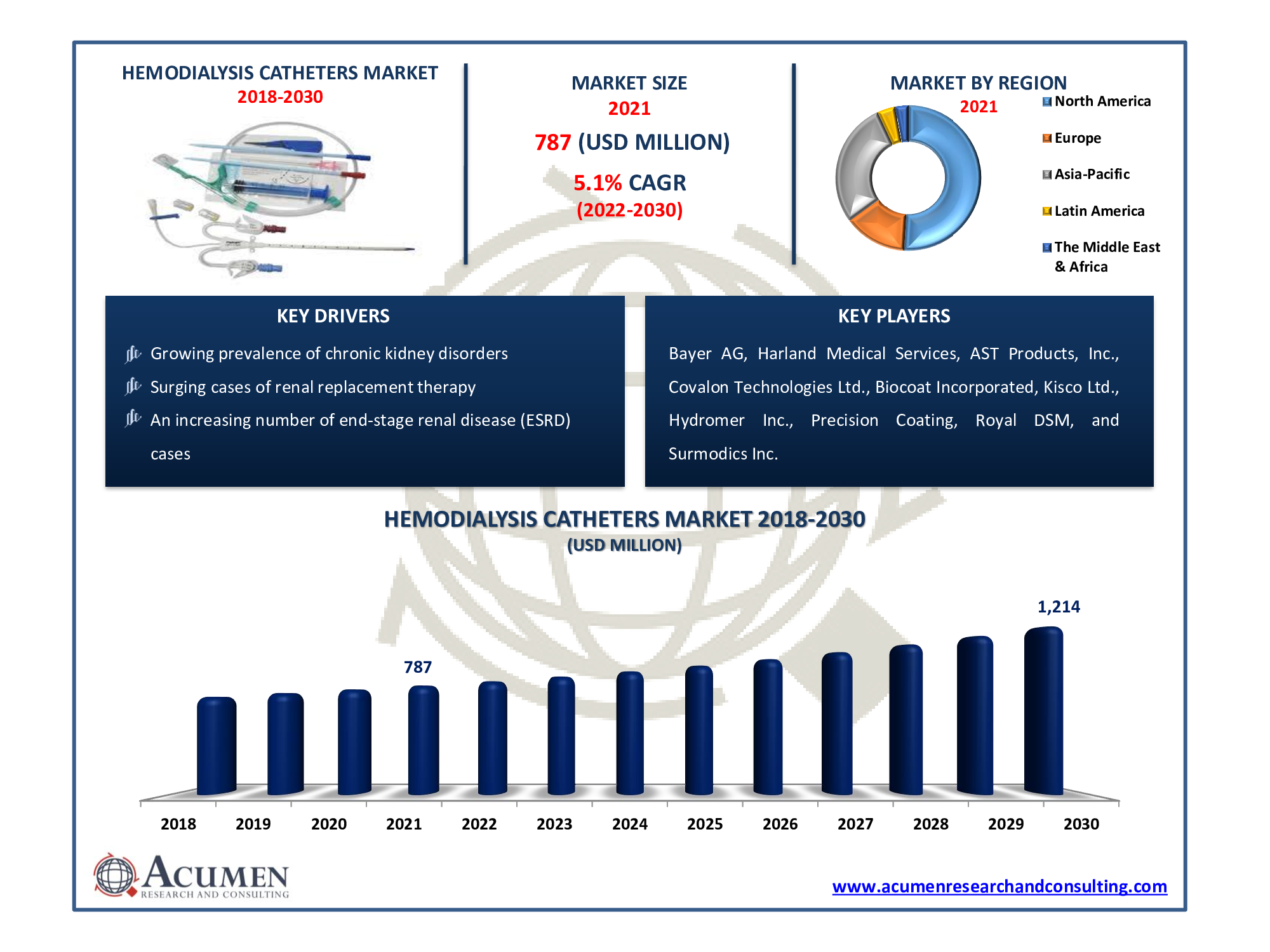 The worldwide hemodialysis catheter market growth is primarily driven by the increasing prevalence of chronic kidney disorders. Chronic kidney disease (CKD) has been identified as a major public health issue worldwide. According to the CDC, the estimated prevalence of chronic kidney disease is 13.4%, with an estimated 5 to 7 million patients requiring renal replacement therapy globally. CKD has a direct impact on the global burden of morbidity and mortality due to its effect on cardiovascular risk and end-stage kidney disease (ESKD). The global rise in this disease is being driven primarily by an increase in the incidence of diabetes, hypertension, obesity, and aging.

Similarly, the rising incidence of end-stage renal disease (ESRD) is another factor boosting the hemodialysis catheters market share. For instance, according to the United States Renal Data System (USRDS), the number of people with incident end-stage renal disease in 2018 was 131,636, representing a 2.3% increase over 2017. For the fourth year in a row, the number of patients with incident ESRD who started in-center hemodialysis ranged from 1,11,000 to 1,13,000. In the meantime, the number of patients starting peritoneal dialysis and receiving a preemptive transplant hit a record level of 18,631.

Additionally, the increasing cases of renal replacement therapy and shortage of kidney donors are expected to fuel the industry demand. However, the complication associated with the procedure is expected to create hurdles for growth in the market. Then again, a lack of awareness about kidney-related disorders especially in emerging nations could also limit the market from growing. Furthermore, surging technological advancements in the hemodialysis catheters and new product launches by key players might create numerous growth opportunities for the market during the forecast timeframe from 2022 to 2030. For instance, in December 2020 – Medtronic launched a dialysis machine for neonatal and pediatrics in the United States. This launch assisted the company in expanding its market position in the renal segment. Finally, severe COVID-19 infection can cause acute kidney injury, necessitating hemodialysis and thus the use of hemodialysis catheters was maintained during the pandemic. 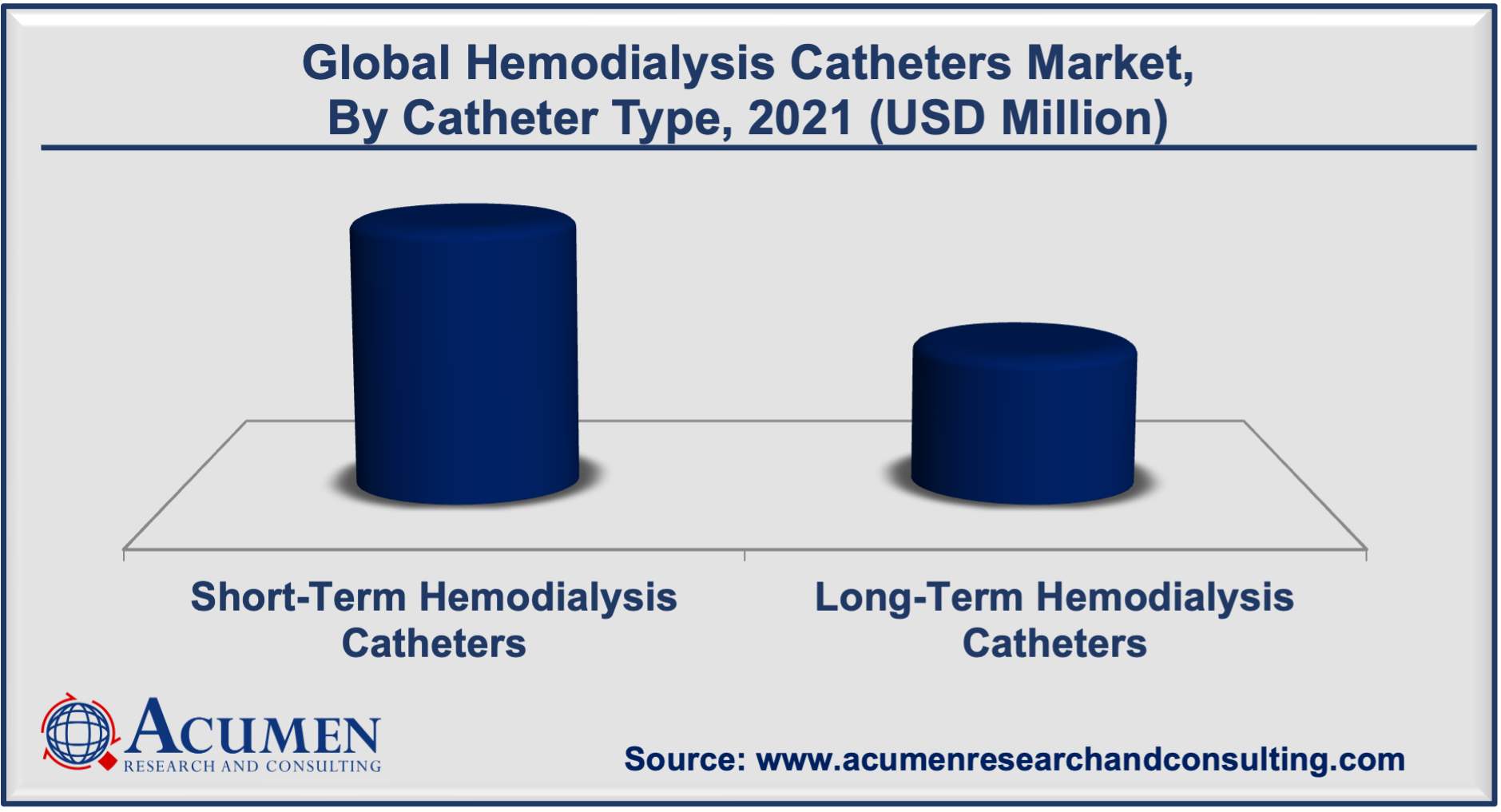 According to our analysis, the polyurethane material acquired the maximum market share in 2021. The market for this segment is growing due to its rising preference for hemodialysis catheters. Polyurethane is preferred over silicone because it offers advantages such as being stronger than silicone, having thinner catheter walls, and having a larger internal diameter than a silicone catheter of the same size. Furthermore, polyurethane is a thermoplastic, which means it loosens up when warmed (by the body or blood) and tightens when cooled. 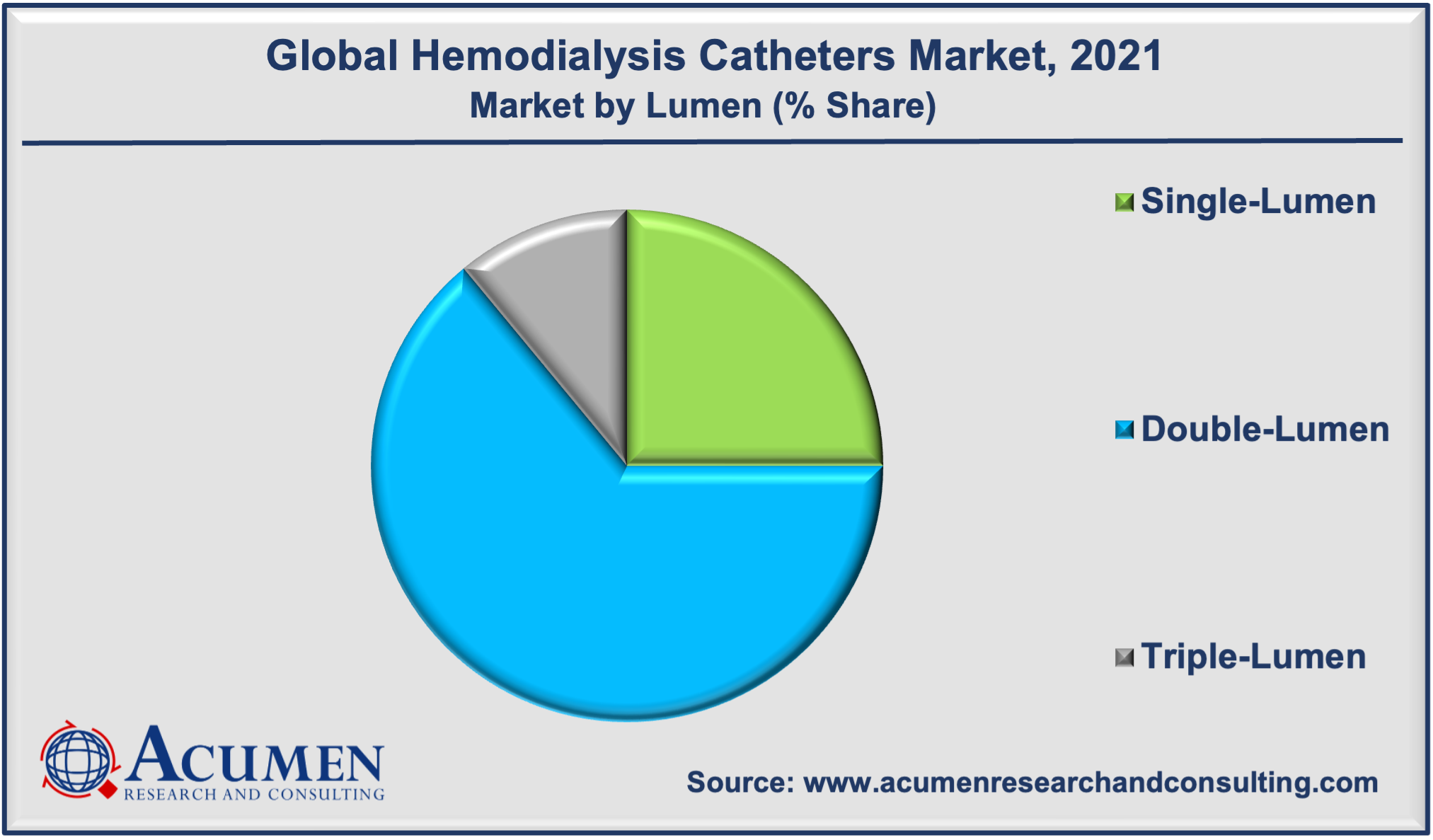 Based on them, double-lumen catheters occupied a substantial market share. Double-lumen allows the injection of two incompatible fluids or medications at the same time. It has several benefits, such as the ideal balance of flexibility and durability, which makes it a popular lumen type for hemodialysis procedures. Meanwhile, the triple-lumen also called multiple-lumen is expected to witness a noteworthy growth rate in the coming years.

The region's supremacy can be ascribed to the presence of favorable government initiatives, the presence of well-established healthcare facilities, improved access to healthcare facilities, and surging awareness regarding kidney disorders. Meanwhile, the Asia-Pacific region is anticipated to witness the fastest growth rate in the coming years due to the rising prevalence of chronic kidney disorders and increasing investments by government organizations in healthcare infrastructure.

What was the market size of global hemodialysis catheters market in 2021?

The global hemodialysis catheters market size was valued at USD 787 Million in 2021.

What will be the projected CAGR for global hemodialysis catheters market during forecast period of 2022 to 2030?

The projected CAGR of hemodialysis catheters market during the analysis period of 2022 to 2030 is 5.1%.

Which region held the dominating position in the global hemodialysis catheters market?

North America held the dominating share for hemodialysis catheters during the analysis period of 2022 to 2030.

Asia-Pacific region exhibited fastest growing CAGR for hemodialysis catheters during the analysis period of 2022 to 2030.

What are the current trends and dynamics in the global hemodialysis catheters market?

By segment catheters type, which sub-segment held the maximum share?