The Global Industrial Alcohol Market size accounted for USD 124 Billion in 2021 and is estimated to reach the market value of USD 301 Billion by 2030. 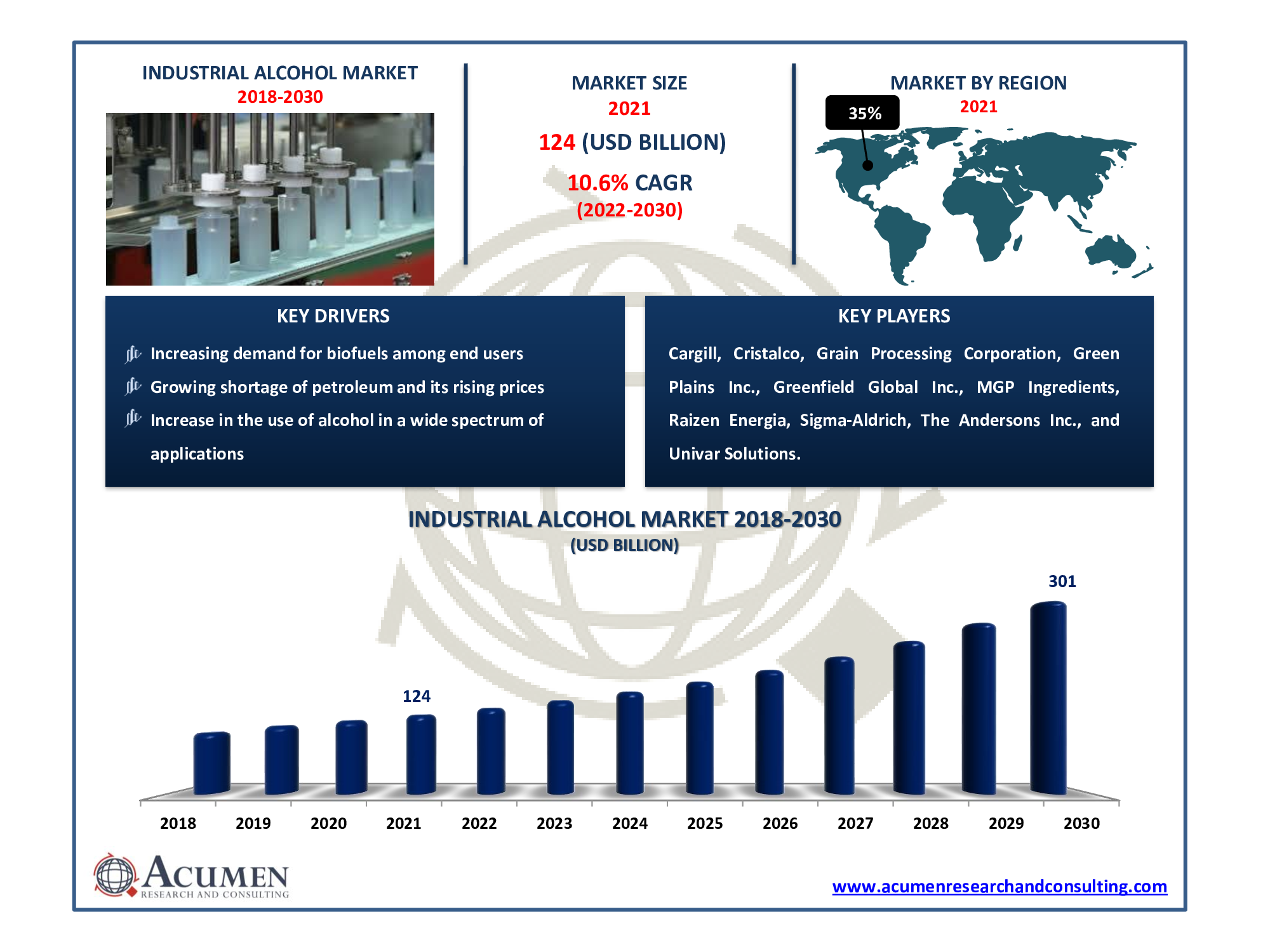 Industrial alcohol is a type of alcohol that is used in industrial applications. This includes mineralized methylated spirits and denatured spirits, as well as any other spirits with which any substance is mixed, but excludes liquor. Industrial alcohols are classified as either pure or denatured. Because pure form contains few impurities, it is useful in certain industrial applications that require a pure form free of contaminants. Denatured alcohol is a type of alcohol that contains additives.

Growing demand for biofuels among end-user is one of the primary factors expanding the industrial alcohol market revenue. According to the International Energy Association (IEA), worldwide demand for biofuels is expected to augment by 41 billion liters, or 28%, from 2021 to 2026. Furthermore, the Environmental Protection Agency (EPA) states that substituting fossil fuels with biofuels has the opportunity to generate several benefits. Unlike fossil fuels, which are finite resources, biofuels are made from renewable feedstocks. As a result, their production and use could theoretically be sustained indefinitely.

However, the rise in raw material prices and strict approval policies from various regulatory bodies are acting as a roadblock to lucrative market growth. Furthermore, the advent of greener ethyl alcohol sources and rising demand for ethanol in emerging countries are positively supporting the market, thereby creating numerous growth prospects in the coming future.

The global industrial alcohol market segmentation is based on product, source, application, and region. 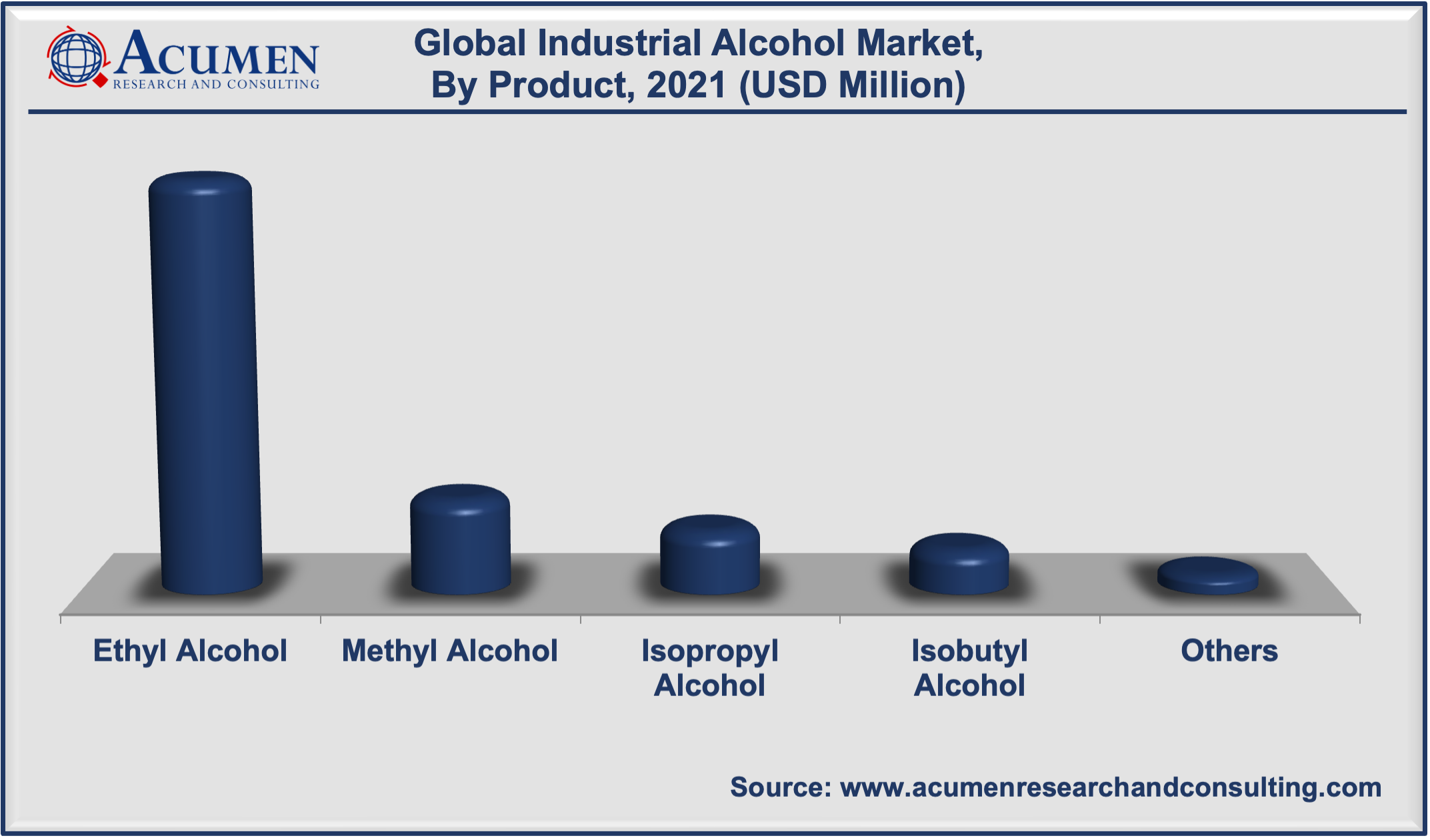 Based on products, the ethyl alcohol (ethanol) subsegment accounted for the majority of the industrial alcohol market share in 2021. One of the major market drivers is the use of ethanol as a biofuel. Increased ethanol blending with gasoline around the world, as well as rising demand for ethanol produced from corn and sugar, are likely to offer opportunities for market expansion studied during the forecast timeframe. Due to low demand, ethanol as a fuel is reportedly experiencing difficulties. Beverage, disinfectant, and personal care consumption are at an all-time high, and this trend is likely to continue for the next two to three years.

According to our analysis, the corn segment currently dominates the market and is anticipated to remain dominant throughout the projected timeline. Corn is the most promising raw material; others are grain and grain products, molasses, whey, etc. Corn grain is an excellent biofuel feedstock due to its high starch content and ease of conversion to ethanol. Corn ethanol is currently primarily used in gasoline blends to create blends such as E10, E15, and E85. To reduce air pollution, ethanol is blended into more than 98% of gasoline sold in the United States. However, the fossil fuels sub-segment is expected to grow the fastest, as fossil fuels gain popularity as a source for the production of industrial alcohol, primarily ethyl alcohol and methyl alcohol. 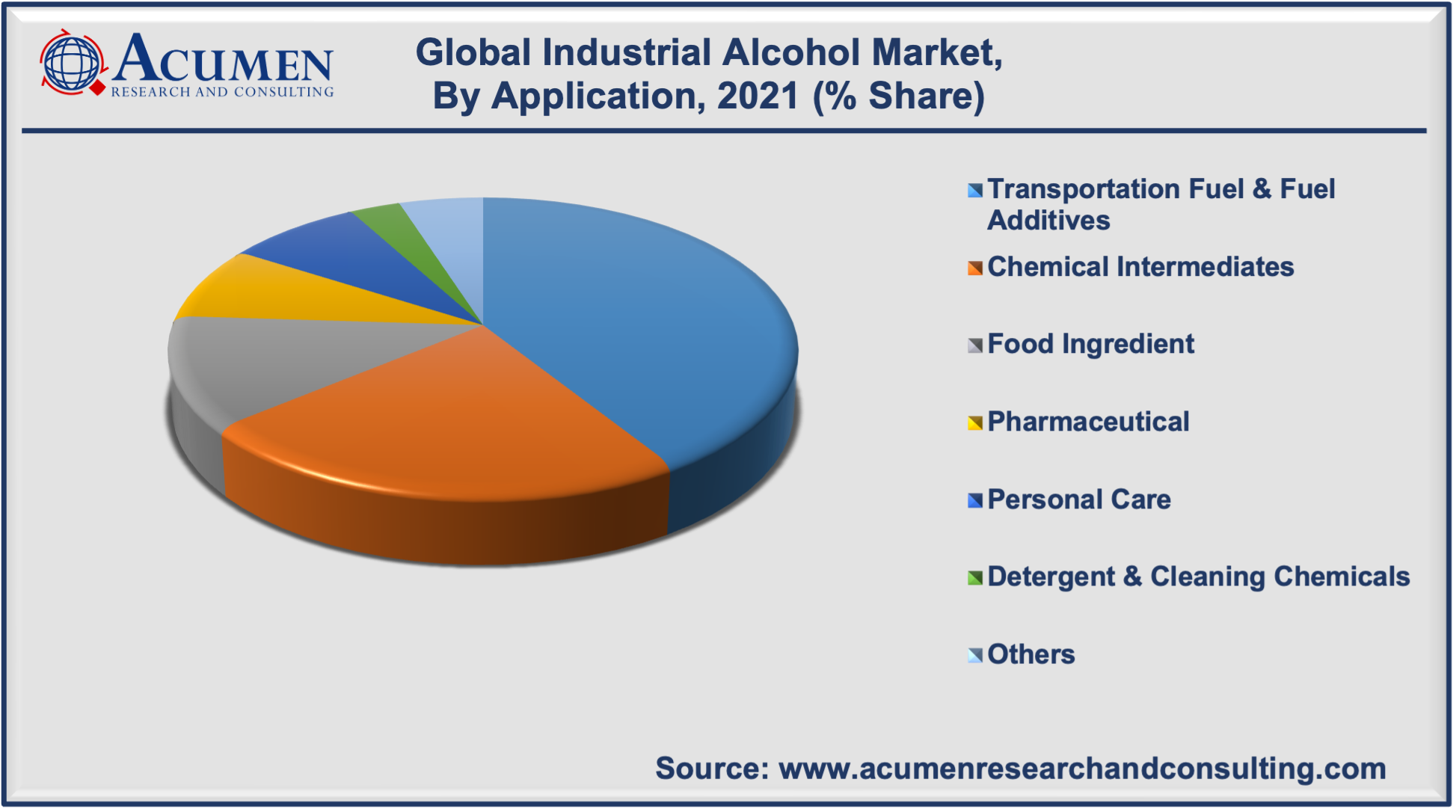 The transportation fuel and fuel additives application generated a significant industrial alcohol market share in 2021 because of the increasing demand for fuel in the automotive industry. Alcohols, such as ethanol, have a significant application as a transportation fuel. Several automobile manufacturers in the United States are producing ethanol, which allows vehicles to run on a type of fuel that is 85 percent ethanol and 15 percent gasoline. On the other hand, the pharmaceutical application is expected to gain significant traction in the coming years. Industrial alcohols are used in the pharmaceutical industry because of the properties that allow them to act as a carrier for a broad range of medicines, decongestants, iodine solutions, and other products.

In 2021, North America acquired a considerable amount of share 2021. The region’s growing use of ethanol as a transportation fuel is propelling the market forward. The growing popularity of automobiles is driving up demand for ethanol fuel, which helps to reduce overall costs. Meanwhile, the Asia-Pacific region is likely to register the fastest growth rate during the forecast timeframe from 2022 to 2030. This is due to the increased focus on minimizing GHG emissions globally, as well as the region's low oil consumption.

What was the market size of global industrial alcohol market in 2021?

What will be the projected CAGR for global industrial alcohol market during forecast period of 2022 to 2030?

The projected CAGR industrial alcohol market during the analysis period of 2022 to 2030 is 10.6%.

Which region held the dominating position in the global industrial alcohol market?

North America held the dominating share for industrial alcohol during the analysis period of 2022 to 2030.

Asia-Pacific region exhibited fastest growing CAGR for industrial alcohol during the analysis period of 2022 to 2030.

What are the current trends and dynamics in the global industrial alcohol market?

Increasing demand for biofuels among end users, increase in the use of alcohol in a wide spectrum of applications, and growing shortage of petroleum drives the growth of global industrial alcohol market.

Based on source, corn sub-segment held the maximum share for industrial alcohol market in 2021.