Growing demand for herbal products over synthetic drugs and the growing trend in food and beverage industry are driving the market growth.

Lignans are a group of secondary metabolites found naturally in plants products such as cereals, vegetables, cereals and other fiber rich foods. Lignans are said to be effective in cancer and diabetic patients due to its defense against pathogenic fungi and bacteria, thereby eliminating the risk of secondary infections in these patients. Lignans also help in boosting the immune systems of an individual as it is beneficial for human gut. Growing awareness regarding healthy and organic food products for improved health outcomes and increased products of lignin rich products are driving the market for lignans. 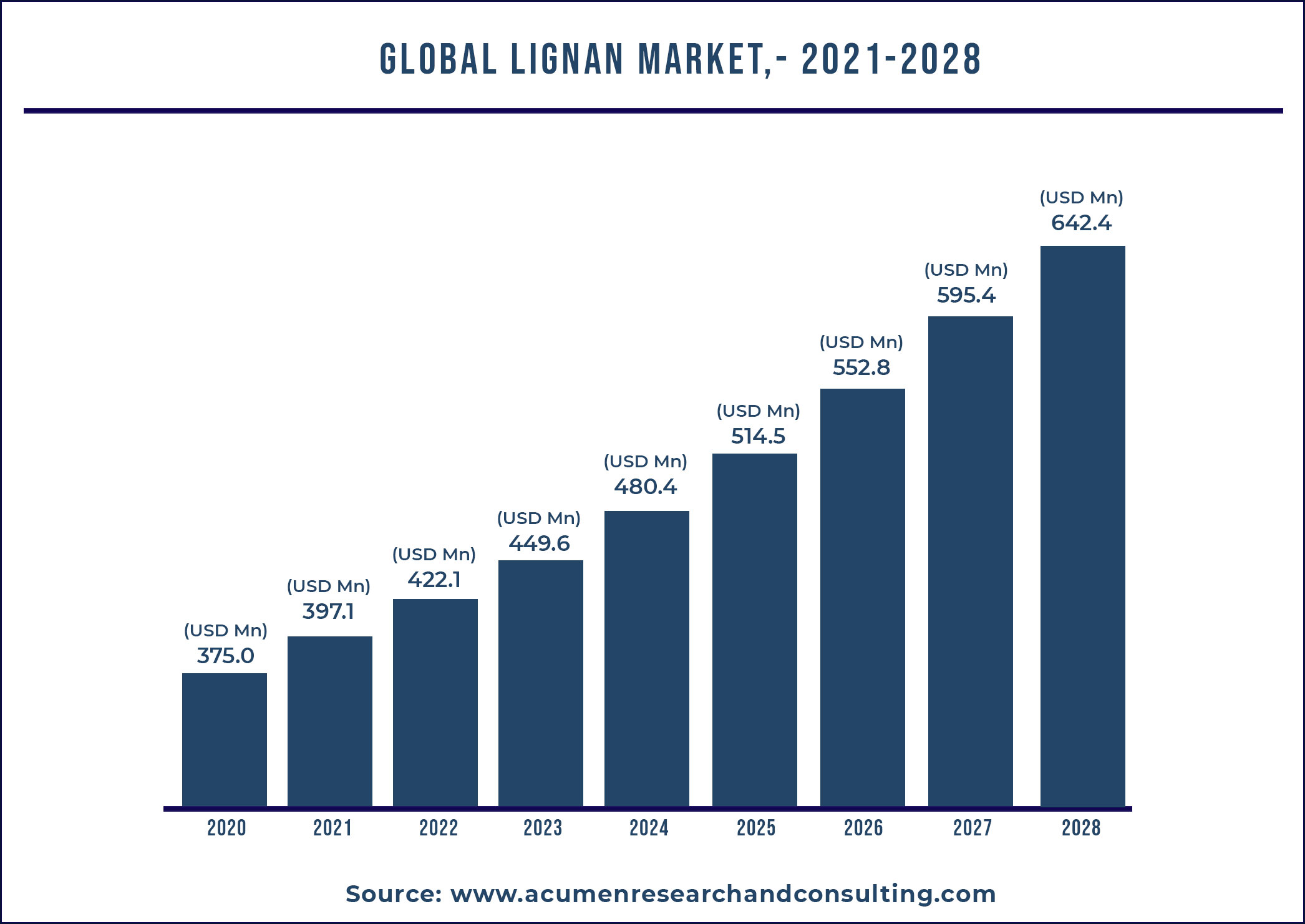 It is also observed that the lignan also has the anti-oxidant ability for the prevention of various disorders, including cardiovascular disease and cancer. Traditionally lignans have showed health benefit such as lowered heart diseases, menopausal symptoms, osteoporosis and breast cancer.

There are some other rich sources of the lignan which are flaxseed and sesame seeds which can be utilized commercially for the fortification of food products and in the pharmaceutical industry. Soy seed, rapeseed, pumpkin seed, sunflower seed, wheat, oats, rye, barley, legumes, beans, berries, and vegetables are also other sources of lignan.

The rapid increase in use of lignan in cosmetics, pharmaceuticals, animal feed industry, and food and also increase in nutraceutical and functional foods are the factors which are going to drive the market.

Food and Beverages held the largest share by application

Consumption of lignan varies geographically due to some dietary methods of different regions. For instance, the traditional Mediterranean diet is pre-dominantly plant based diet with high intake of unprocessed cereals, legumes, vegetables, nuts, fruits. Indian diet contains various types of categories of food products including fish, grapes, chocolates, oil, tea, coffee, biscuits and bread. Due to high lignan content, the Indian mulberry has been extensively traditionally utilized in the treatment of cancer, diabetes, high blood pressure, diarrhea, headache, inflammation, etc. The typical content of Indian diet is sesame, both sesame seeds and oil is rich in lignan.

Due to dietary habits of the population which have traditionally influenced diets and the traditional methods to cure diseases by natural process is increasing along with demand for rich contents of natural ingredients is also growing. The rising occurrence of chronic and lifestyle related diseases, in confluence the considerable shift towards herbal drugs, represent one of the key factor boosting the global lignans market growth. 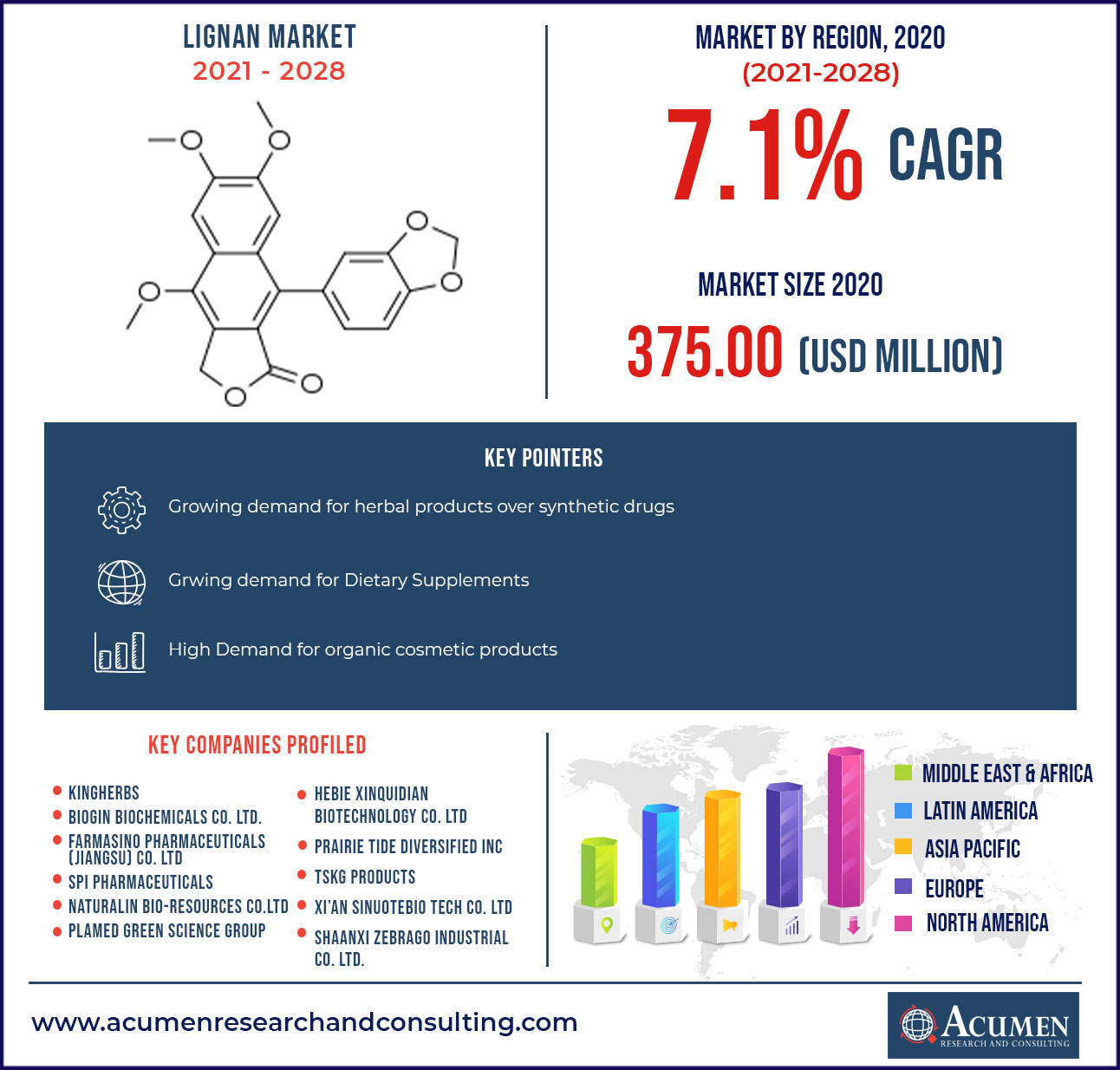 How much was the estimated value of the global lignan market in 2020?

What will be the projected CAGR for global lignan market during forecast period of 2021 to 2028?

Which region held the dominating position in the global lignan market?

What are the current trends and dynamics in the global lignan market?

Growing demand for herbal products over synthetic drugs and the growing organic trend in food and beverage industry drive the market growth.

Based on Source, Cereals and Grains segment held the maximum share for lignan market in 2020