As a metal, lithium is an element with unique physical and chemical properties. There are numerous uses for lithium and its compounds. The glass and ceramics industry and aluminum production are two of the most popular applications in the industry. In addition, lithium and its derivatives are also used in a variety of industrial applications including lithium grease petroleum products, high-temperature glass, and ceramics, and flux additives for the manufacture of steel, iron, and other metals. In addition, lithium compounds are used as catalysts in a variety of industrial processes. A catalyst compound is a substance that can speed up or slow down a chemical reaction. For example, a lithium catalyst is used to make a strong and durable synthetic rubber. Unlike natural rubber, synthetic rubber containing lithium compounds does not need to be vulcanized.

·         Increasing demand from a variety of end-user industries, including glass and ceramics

·         Increasing use of portable devices with rechargeable batteries

The increasing adoption of lithium compounds from end-use industries such as Li-ion batteries, polymers, lubricants, glass, and ceramics, among others, is expected to propel the lithium compounds market. Furthermore, the rising demand for lithium and lithium-ion batteries in electric mobility due to the relatively low self-discharge rate, quick charging, extended life cycle, high power density, and lightweight will boost product demand for the market. Furthermore, strict government regulations governing environmental controls via vehicle carbon emissions, backed up by companies forming strategic partnerships to develop battery cells and electric vehicles, will drive industry growth. The increased demand for energy-saving devices with decent battery backup as a result of various factors such as a drastic shift in lifestyle, technological advancements, and others is driving the lithium compounds market. Furthermore, the high operational cost of lithium production is a major restraint to the growth of the lithium compounds market. 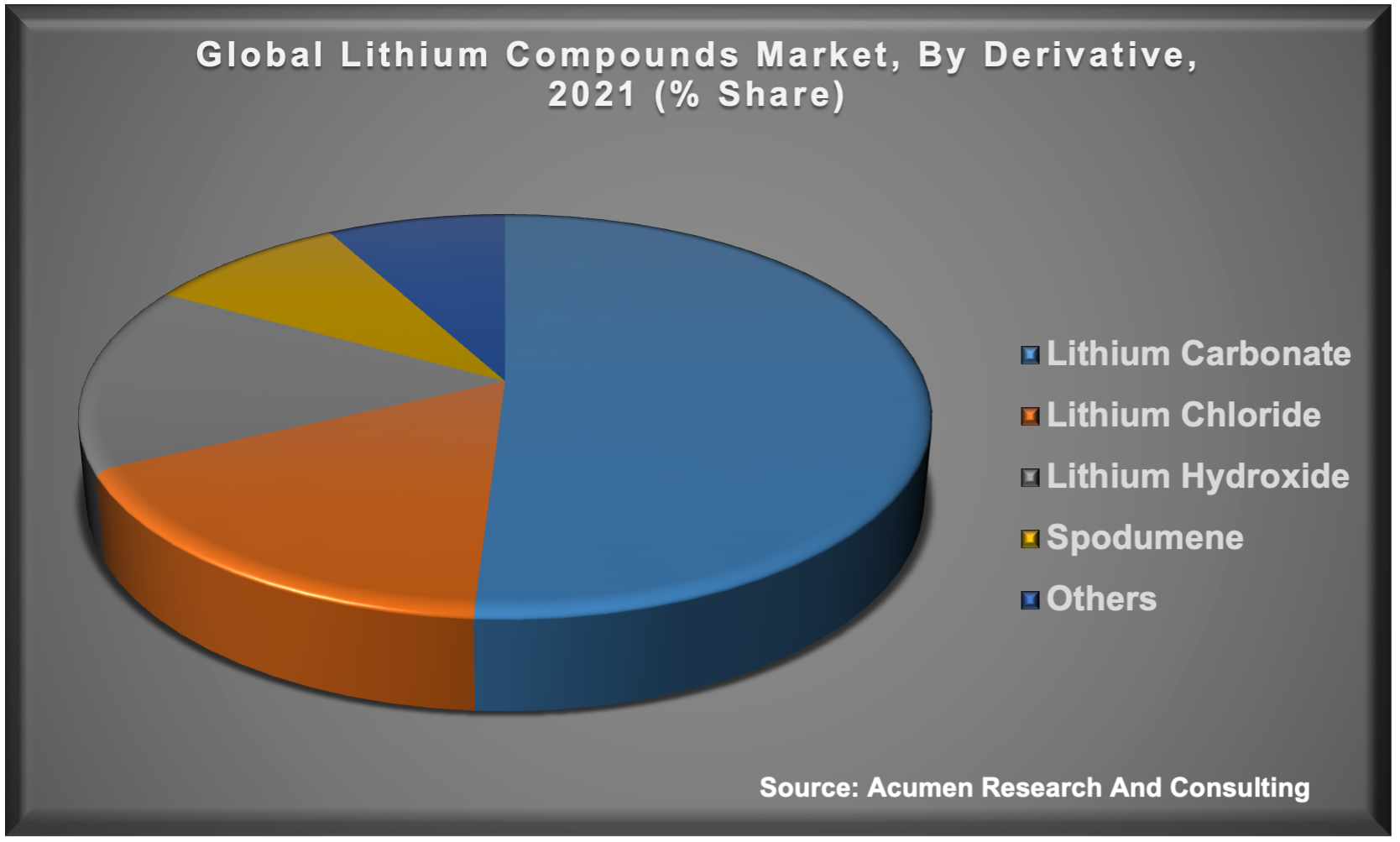 Based on the application, the batteries segment will hold the largest market share in 2021. This expansion can be attributed to the increasing demand for lithium-ion batteries in electric vehicles and grid storage, as they provide high-energy density solutions while remaining small and light in weight. The resultant increase in EV registration and a decrease in the cost of the lithium-ion battery are expected to increase market size over the projected timeframe. The growing desire to keep the environment safe has fueled the growth of hydropower such as photovoltaic installations and nuclear power plants, as well as renewable power projects are fueling the growth of lithium-ion batteries. Furthermore, the rising popularity of lithium-ion battery machinery in the medical sector is fueling growth. Furthermore, with the increasing use of rechargeable batteries in material-handling machinery in industries due to automation, the demand for these batteries is increasing. Aside from that, rising demand for battery-electric and plug-in hybrid vehicles, as well as increased adoption of lithium-ion batteries in the renewable energy industry, are propelling the segment forward.

In the year 2021, the Asia-Pacific region held the largest share of the Lithium compounds market. Increasing consumption of new and portable energy storage systems in automobiles, grid-connected battery storage, and huge demand for consumer gadgets such as smartphones, tablets, and laptops are expected to drive the market in the region. Massive economic expansion and thriving electronics and fully electric automotive industries in Asia Pacific countries like China, Japan, and India are to bear responsibility for the region's high growth rate. The rapid population growth in countries such as India and China, combined with the countries' reliance on end-use industries such as building and construction, automotive, and medical, is driving demand for lithium compounds, which are used in a wide range of applications in these end-use industries. For example, the pharmaceutical market in India is expected to be worth around US$41 billion in the fourth quarter of 2021, according to the India Brand Equity Foundation (IBEF).

How much was the estimated value of the global lithium compounds market in 2021?

The estimated value of global lithium compounds market in 2021 was accounted to be US$3,956Mn.

What will be the projected CAGR for global Lithium Compounds market during forecast period of 2022 to 2030?

Which region held the dominating position in the global lithium compounds market?

What are the current trends and dynamics in the global lithium compounds market?

Growing demands for Li-ion batteries in electric vehicles and increasing demand from a variety of end-user industries, including glass and ceramics are the prominent factors that fuel the growth of global lithium compounds market

By segment derivative, which sub-segment held the maximum share?

Based on derivative, lithium carbonate held the maximum share for lithium compounds market in 2021