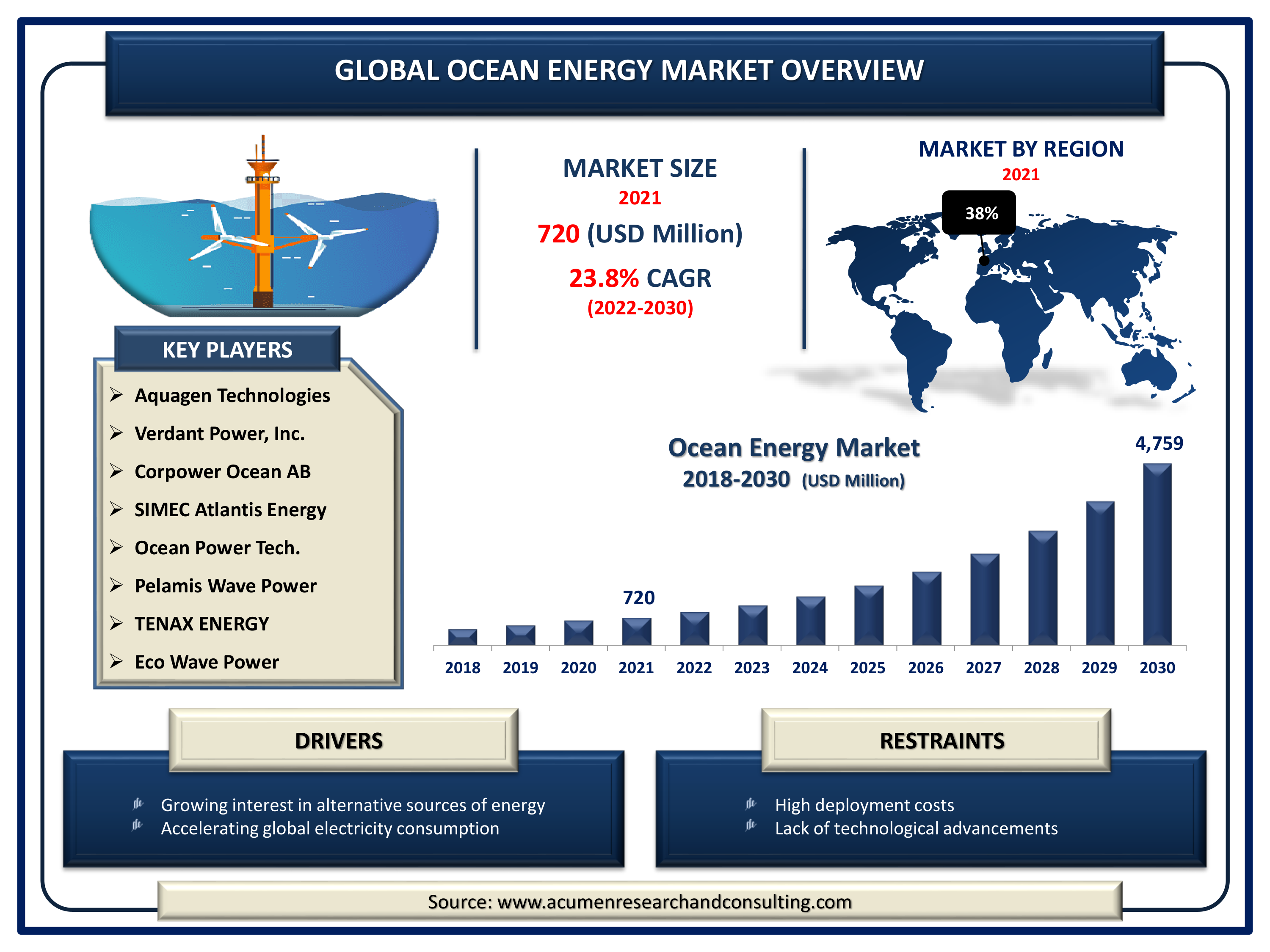 The ocean is one of the world's largest yet least known renewable sources of energy. Ocean energy is one of the world's greatest untapped energy sources, with the potential to provide a considerable quantity of new clean and dependable power globally. Ocean energy systems generate electricity by harnessing the power of tides and waves, as well as variations in temperature and salinity. Ocean energy, also known as marine energy, ocean power, and marine renewable sources, is non-polluting energy produced from tidal streams, ocean currents, tidal range, salinity gradients, ocean waves, and temperature gradients. The growing global emphasis on renewable energy, along with rising crude oil prices and environmental destruction, should benefit the ocean energy market over the forecasting years. In recent, power grid designs are projected to change as the energy sector moves forward toward a decentralized supply model, as evidenced by the development of more sophisticated grids.

The growing demand for renewable energy sources and environmental pollution throughout the world are predicted to fuel the expansion of the global ocean energy market size over the forecast timeframe. Continuous government assistance for the utilization of renewable energies such as wave and tidal energy is likely to propel the ocean energy market value in the next decades. Furthermore, rising levels of pollution have had a severe impact on the health of living beings and the environment, increasing investment in sustainable energy grids, which drives the ocean energy market trends. With increased awareness, demand for such energy sources has increased significantly, promoting industry expansion.

Besides that, the high costs associated with current technology, as well as the rising amount of security, socioeconomic, and environmental restrictions, would most certainly act as market barriers to the development of ocean energy industry in the expected period.

The global ocean energy market segmentation based on the technology, application and geographical region. 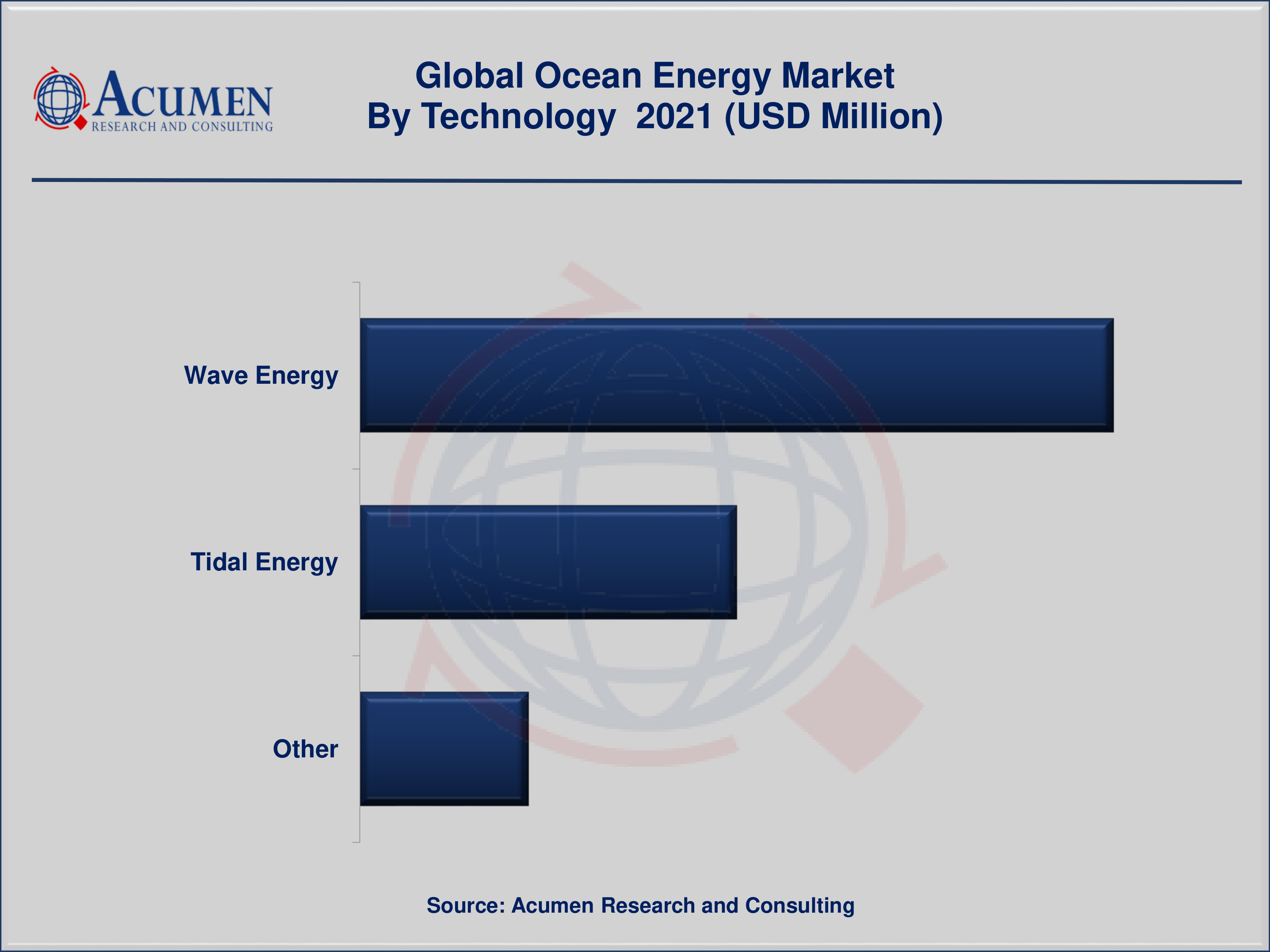 In terms of technology, the wave energy segment held the largest market share in 2021. Wave energy is a renewable energy source that is produced by the movement of the ocean's waves. Wave energy can be harvested using a variety of methods, including putting electric generators on the ocean's surface. Wave energy converters are also used to collect energy from crashing waves, which are then used to generate power using turbines and generators. Furthermore, increasing electricity demand, rising preferences for alternative energy sources, and attempts to minimize greenhouse gas emissions are propelling the wave energy segment and boosting market share for ocean energy. Besides that, although this industry is still in its early stages, there is a need to improve expenditure and R&D, which will provide further chances in the coming years.

Based on the application, the market is further segmented into power generation and desalination. According to the ocean energy market forecast, the power generation segment of the market is expected to develop significantly in the coming years. This is owing to the increased dependency on electricity, which may also serve as the key driving force for the industry. Furthermore, driving factors include a shift towards cleaner forms of energy production supply and objectives to increase the share of renewable energy in the global power generation mix, which includes all major established and emerging economies. Furthermore, ocean-generated electricity is gaining popularity due to its potential, dependability, and high availability when compared to conventional alternative energy sources, and it is presently dominating the market.

Europe is expected to gain a significant market share in the coming years as a result of ongoing and upcoming developments, an appealing institutional environment, and ideal sites that can accommodate small and large operations. Furthermore, considerable efforts by governments from various sectors of the economy to support the transition to a low-carbon industry, as well as significant jumps made by the region's energy industry, are driving this regional expansion. Renewable energy is gaining market share in Europe and is supposed to propel regional industry growth. With the establishment of the European Marine Energy Center, the United Kingdom appears to have the most extensive background application of this concept. Furthermore, the European Marine Energy Institute is the prime center for wave technology activities and has housed a significant number of ocean energy developers that are reaching commercialization.

How much was the global ocean energy market size in 2021?

The global ocean energy market size in 2021 was accounted to be USD 720 Million.

What will be the projected CAGR for global ocean energy market during forecast period of 2022 to 2030?

Which region held the dominating position in the global ocean energy market?

Europe held the dominating share for ocean energy during the analysis period of 2022 to 2030.

Asia-Pacific region exhibited fastest growing CAGR for ocean energy during the analysis period of 2022 to 2030.

What are the current trends and dynamics in the global ocean energy market?

By segment technology, which sub-segment held the maximum share?

Based on technology, wave energy segment held the maximum share for ocean energy market in 2021.