A precision gearbox is made up of spur gears, helical gears, bevel gears, worm gears, and an epicycle. Precision gearbox design is based on the types of gearbox used in field work specifications, which is arranged in a special manner to provide required gear or speed ratios to the eventual drive of vehicle, and a gearbox usually comes with the speed specification involving five speed transmission with a reverse, and an automatic transmission movement. 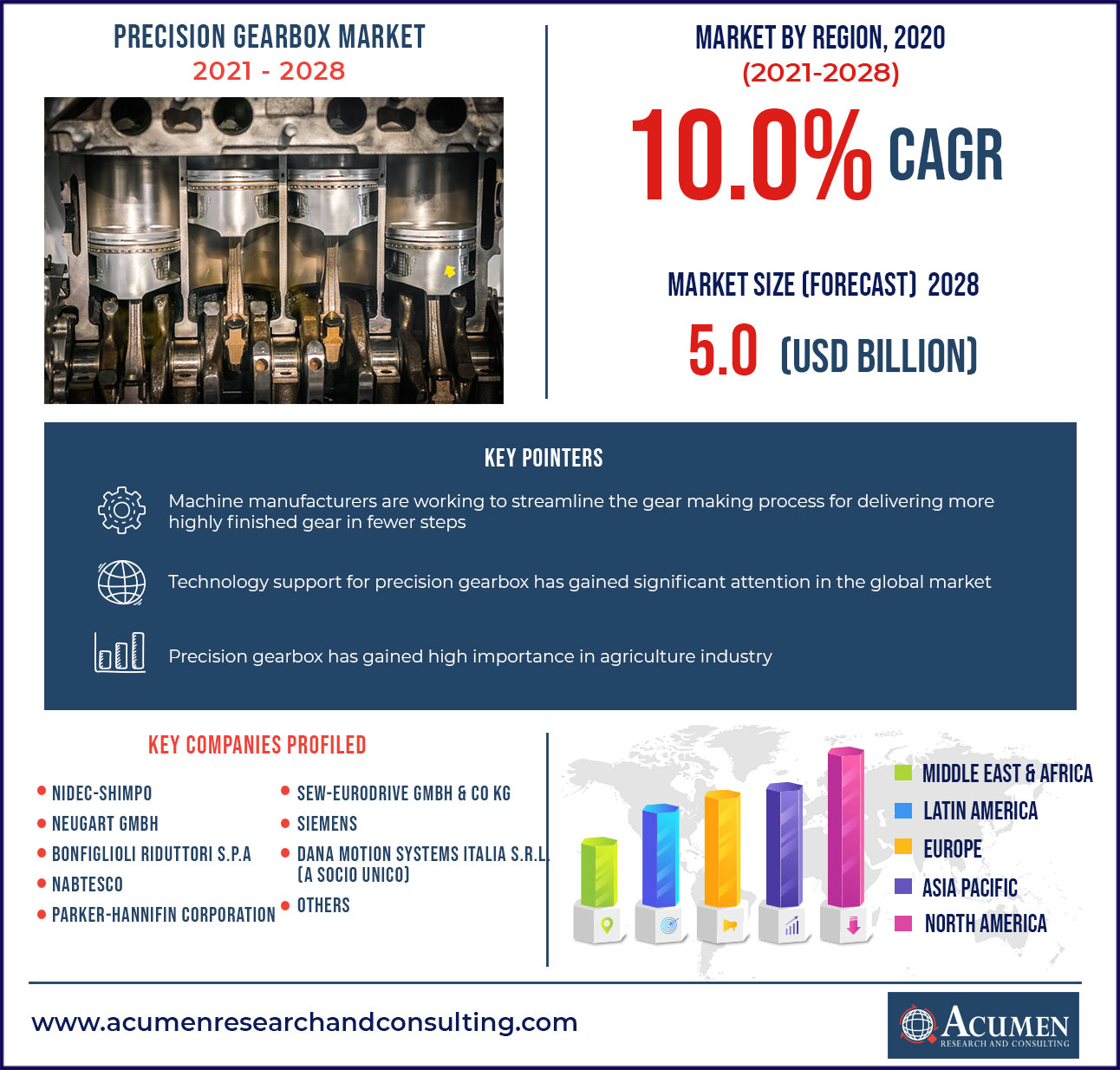 According to the SME report, with rising demand for precision gears in both large and small growing industries, as well as the economy, new innovations in gear production technology are changing. Indeed, these new gear manufacturing methods, which aim to streamline processes of delivering high quality gears through the use of CNC programming and precision cutters, open up a lucrative opportunity for creative new gear designs in the future. Furthermore, the paradigm shift toward smart factories through the use of lean manufacturing and automation presents potential growth opportunities for the global precision gearbox market. Such factors have a positive impact on the global precision gearbox market growth.

Manufacturers are increasing their focus on automation for the entire production cycle to reduce operational costs and improve total output, according to a report released by the Outdoor Industry Association. Industry automation and the use of gearboxes in surgical robots are two prominent application segments that are expected to provide significant growth opportunities for the precision gearbox market. In the industry, automated parts are intended to perform repetitive tasks at high frequencies as compared to labor work. Furthermore, the introduction of artificial intelligence and machine learning aids in the development of robots and machinery capable of performing operations with high accuracy and in less time. This benefits the manufacturer by lowering incremental costs through waste reduction, material optimization, and cost savings on labor expenses, scrap, and raw material claims.

Agricultural precision gearboxes and hygienic gearboxes are extremely durable and dependable. The agricultural industry has a harsh environment. These include remote, all-weather outdoor locations, constant moisture, and frequent cleaning. Due to tight deadlines and schedules, down time is not a viable option. During harvest season, the agriculture industry relies heavily on near-constant operation. As a result, agriculture precision gearboxes must be extremely durable and dependable. Furthermore, power transmission necessitates the need for robustness, dependability, and compatibility with the installation environment. Such factors possess dominating impact on the global growth of precision gearbox market in the forecast period.

The global precision gearbox market is segmented based on product and application. Product is segmented as planetary, harmonic, and cycloidal. Further, application is segmented as military & aerospace, food, beverage, & tobacco, machine tools, materials handling, packaging, robotics, medical, and others.

Based on application, the robotics segment will account for the dominating share of the overall growth of the precision gearbox market. According to the Frontiers Media S.A. report, robotics are the backbone of several large-scale, traditional manufacturing industries such as automotive or electronics. Currently, the majority of the world's regions see a realistic opportunity to resurrect the manufacturing industry through the use of robots in SMEs and assistive services. A new generation of robotic devices is also altering priorities in the selection of suitable gearboxes. Precision geared product sales to the robotics and machine tool industries accounted for approximately 39% of all precision geared products shipped and are expected to gain a significant market share throughout the forecast period. Instead of extreme precision at high speeds, this influences segmental growth, eventually contributing to the overall growth of the precision gearbox market.

Precision gearboxes will be in high demand in North America in the coming years. This is due to the presence of a well-established automobile industry, which has resulted in massive demand. Furthermore, increased demand for new luxury vehicles as a result of rising living standards has resulted in a rapid expansion of the country's automotive industry trends. Furthermore, rising automation demand from a variety of industry verticals such as food and beverage, packaging, material handling, manufacturing, and others is expected to drive the North American precision gearbox market in the coming years.

How much will be the projected value of the global precision gearbox market in 2028?

Which region held the dominating position in the global precision gearbox market?

Asia Pacific accounted dominating share for the global precision gearbox market and North America is predicted to record fastest growing CAGR for the forecast period of 2021 to 2028.

What are the current trends and dynamics in the global precision gearbox market?