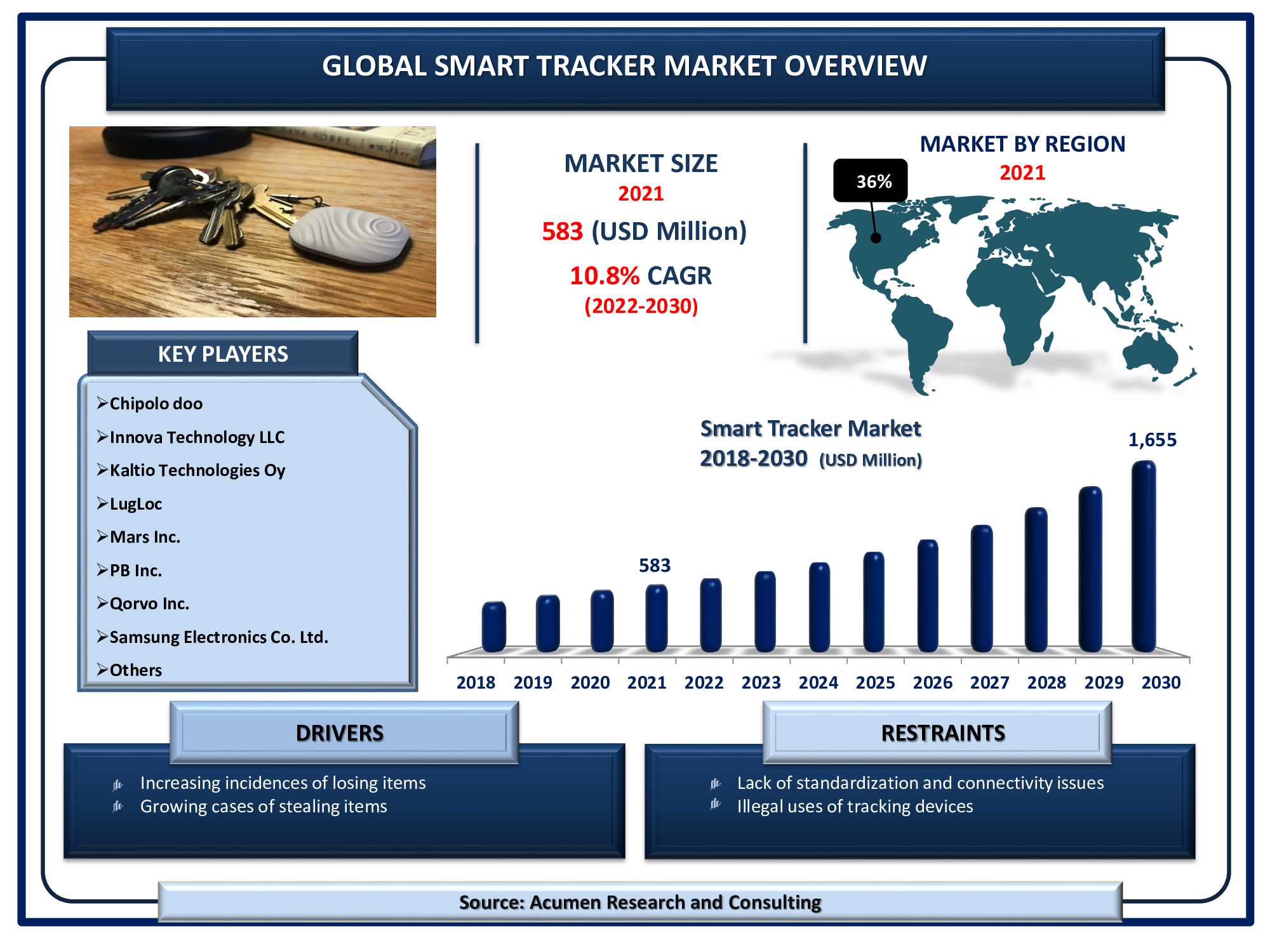 A tracker is an electronic device or software that locates misplaced or lost items. A smart tracker is a more advanced device or software that accomplishes the same task more efficiently. The increasing use of trackers on mobile phones is a recent smart tracker market trend that is fueling industry growth. Several technological breakthroughs have occurred, whether it is Artificial Intelligence, IoT, or Robotics. One such technology is the tracking system, which is extremely important to people on a daily basis. Recovery of a lost device, stolen vehicle, or tracking a person has become easier thanks to tracking systems or devices.

One of the major factors driving the growth of the smart tracker market is the rising number of lost items. According to the Computer Science Zone analysis, the following are the five most frequently lost items in the UK survey - mobile/smartphone, house keys, car keys, sunglasses/glasses, and paperwork. Those polled spent an average of 10 minutes per day searching for such items. Many of the items listed above that are frequently misplaced could have been recovered, and their financial impact reduced, with a simple tracking method that integrates a Pets or non-Pets device or tag with either a smartphone and app or at the very least a callback to an emergency phone number. As a result, the demand for smart trackers is increasing day by day globally.

Growing cases of stealing items are also fueling the smart tracker market growth. According to our smart tracker industry analysis, advancements in tracking sensor technology are expected to boost the market in the coming years. Tracking technology has become an important part of people’s daily lives as a result of technological advancements over the last decade, and it can be an essential tool for our emergency services. Over the last decade, technological advances have put maps on phones, satellite navigation in cars, wearable sensors around wrists, and smart devices in homes, all of which are now a part of millions of people's lives around the world. Furthermore, the introduction of asset management and tracking has greatly aided the industry's growth. Asset management refers to the process of tracking physical equipment and vehicles. Instead, tracking these items is a management system that allows businesses to track the usage and location of their equipment.

Increasing awareness among consumers and the rising focus of software companies to develop new and advanced tracking systems are some of the factors that are creating significant growth opportunities for the market in the coming years. For instance, in May 2022 – Cyngn declared the release of Infinitracker, a worldwide GPS asset-tracking system, and IoT (Internet of things) data compilation gateway with equal to 15 years of battery life. The Infinitracker device is in line with Cyngn's mission to discover new data insights in industrial domains such as manufacturing, logistics, mining, construction, and fulfillment. Similarly, on October 10, 2018 – Tenna, the technology company that enables businesses to find more value in their inventory of equipment, vehicles, and physical assets, today announced the launch of TennaGO, an IoT hardware tracking device that represents the Tenna product line's ongoing expansion.

The worldwide smart tracker market is split based on technology, application, and geography. 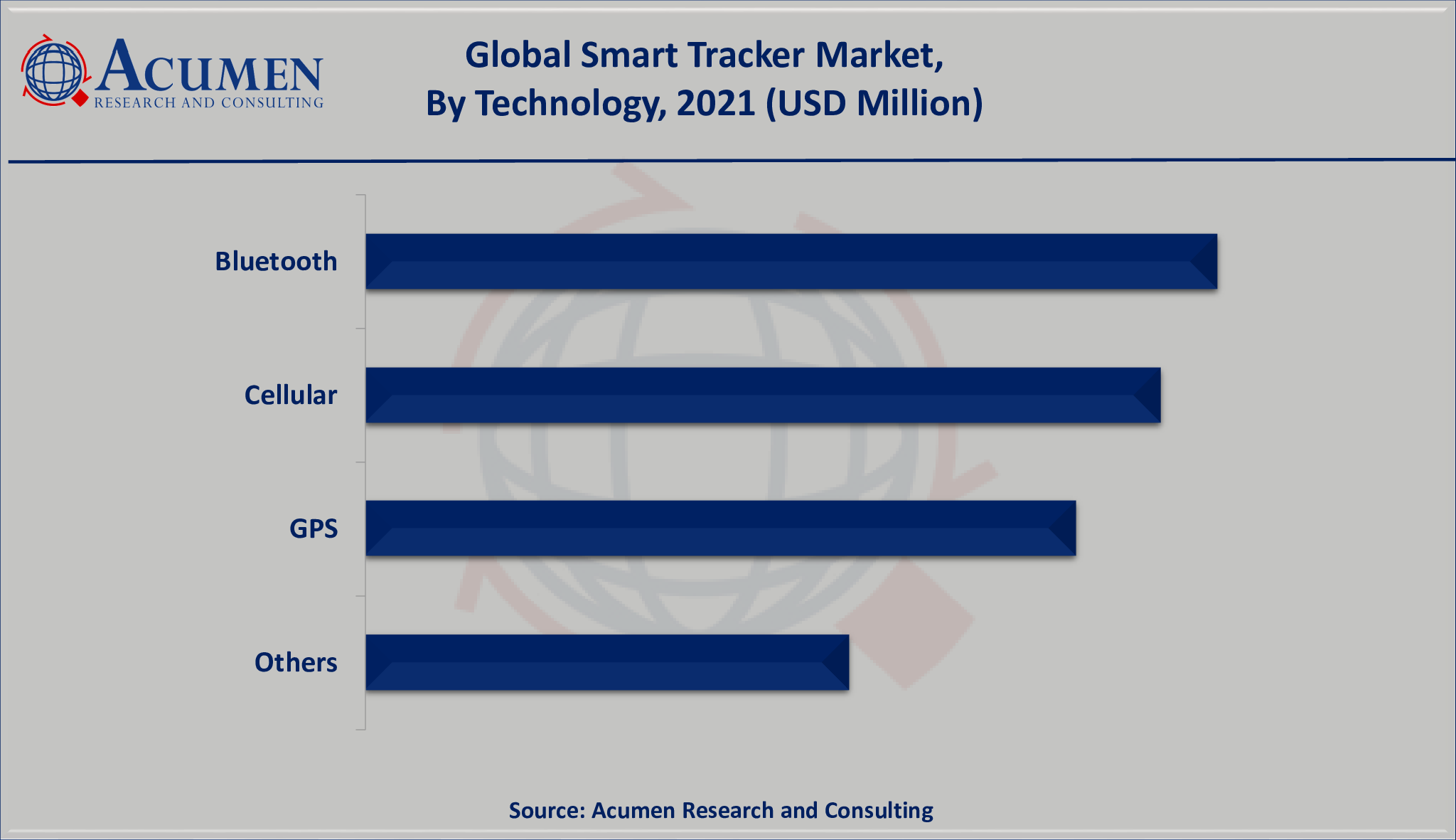 According to our smart tracker market forecast, the bluetooth segment will have a significant market share from 2022 to 2030. Bluetooth is a short-range radio frequency that allows large amounts of data to be transmitted over short distances. Bluetooth is used by many wireless devices, including wireless computer keyboards and mice, portable speakers, and most mobile phones. Bluetooth tracking devices are usually simple to use and low-cost, with no ongoing costs. Users can ping the tracker's location after activating Bluetooth on one's phone and connecting it to it. Some Bluetooth trackers also work in reverse, allowing you to locate your phone by pressing a button on the tracker.

Additionally, the cellular segment is also expected to attain a noteworthy smart tracker market share in the coming years. With developers and designers embedding various processors, sensors, and memories in small-size electronic devices, the smart device industry is growing at an exponential rate. 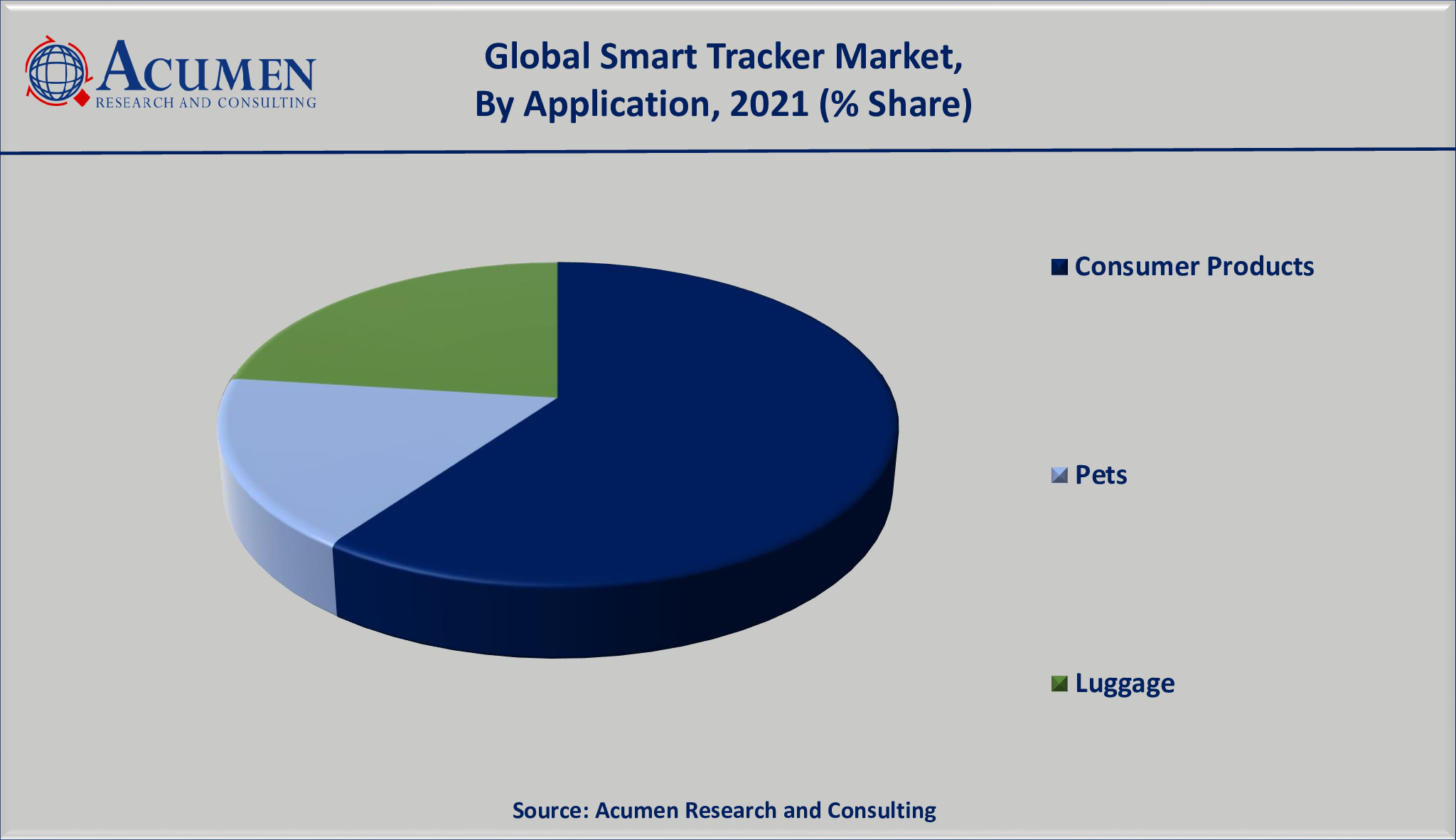 Consumer products currently have a sizable smart tracker market share in terms of connectivity. Consumer goods are more likely to be misplaced or forgotten by humans. Mobile phones, wallets, and sunglasses are among the most commonly misplaced consumer products. According to recent statistics, more than 70 million smartphones are lost each year, with only 7% recovered. Pet smart trackers, on the other hand, have seen a recent surge in popularity. Location tracking is an important feature that is quickly becoming one of the most popular features in pet tracking. Manufacturers are also incorporating sensors into their products, allowing pet owners to track their pets' activities via smartphones.

According to our smart tracker regional analysis, North America dominated the largest market share in 2021 and is projected to continue its supremacy over the forecast timeframe from 2022 to 2030. The US accounted for the majority of the share in North America due to the increased demand for advanced devices among the population, the presence of a high number of pet owners, and high purchasing power among consumers. However, the Asia-Pacific region is likely to register the fastest CAGR throughout the projected years due to the rising application of AI, and IoT in countries such as China, Japan, South Korea, and India. Furthermore, increasing awareness among this and other developing countries will spur the demand for Asia-Pacific smart tracker market in the coming years.

How much was the estimated value of the global smart tracker market in 2021?

The estimated value of global smart tracker market in 2021 was accounted to be USD 583 Million.

What will be the projected CAGR for global smart tracker market during forecast period of 2022 to 2030?

Which region held the dominating position in the global smart tracker market?

North America held the dominating smart tracker during the analysis period of 2022 to 2030.

Asia-Pacific region exhibited fastest growing CAGR for smart tracker during the analysis period of 2022 to 2030.

What are the current trends and dynamics in the global smart tracker market?

Based on technology, Bluetooth segment held the maximum share smart tracker market in 2021.