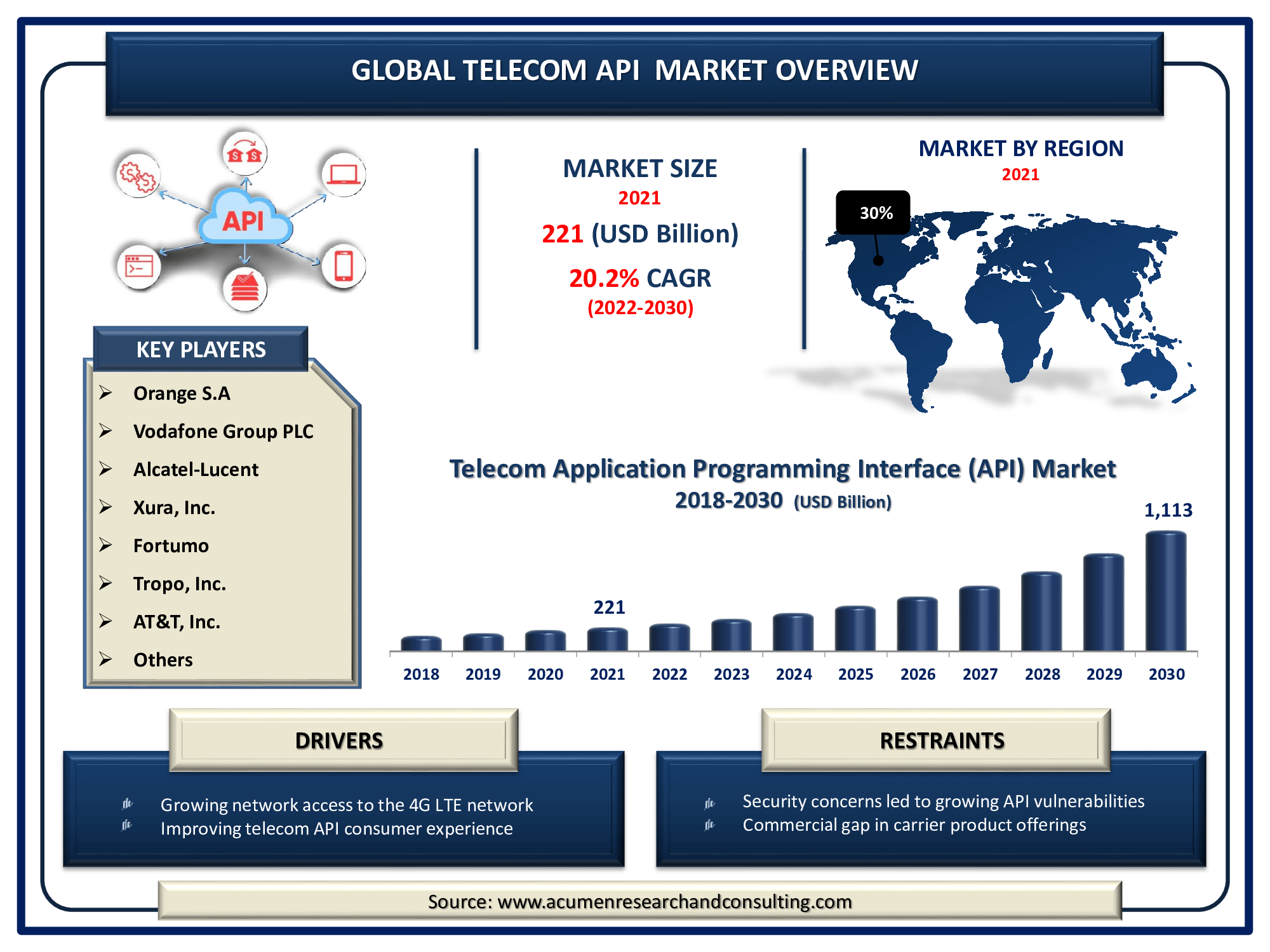 The widespread use of mobile internet and cloud-based services is projected to have an impact on the expansion of the telecom application programming interface (API) market size. The shift from 3rd generation to LTE (Long Term Evolution) as well as the evolving 5th generation, which increases demand for IPv6 migrations and IP-connected appliances, will drive global acceptance of the telecom API market growth. Rising Internet of Things adoption is likely to fuel the telecom API market. Furthermore, end-to-end transparency and the competitive advantage of Wireless telecommunications API are expected to have a favorable impact on the telecom API market value during the projection period.

APIs (application programming interfaces) have been employed to expose a variety of data types and services and to allow heterogeneous structures to communicate efficiently. The Telecom API is a set of programming instructions & standards for navigating a web-based application. It's utilized in smartphone apps and cloud-based telecommunications services including banking, webRTC, location sharing, email, identity management, and others. Moreover, APIs enable the development of apps and services that can be operated separately from the underlying hardware. Recently, telecom API market trends enables the development of user-friendly services for many devices operating on a specific network. A telecom provider provides MMS, voice, location, SMS, and finance APIs, allowing developers to incorporate the APIs into existing apps. By controlling the growing number of users in a system, telecom API improves an application's versatility and scalability.

The growing adoption of the Internet of Things (IoT), device integration, and wearable technology in the telecommunications industry is likely to boost the telecom API market growth throughout the forecast period. Telecom APIs enable end-to-end IoT solutions by serving as a single point of contact between different nodes within the same network, avoiding the need for several third-party internet services for systems development. With increasing IoT penetration, the telecom APIs market size is likely to rise at a breakneck pace.

The significant surge in the number of telecom API start-ups developed in emerging regions such as the Asia-Pacific and Africa is likely to open potential opportunity areas for telecom API market providers throughout the forecast year. Industry titans such as Vodafone, Google, communications service providers (CSPs), as well as other technology supplier groups have formed alliances with start-ups from such growing economies to encourage the expansion of telecom entrepreneurs by providing APIs for application development, hence boosting the telecom API market shares.

The global telecom API market segmentation is based on the type, end-user and geographical region. 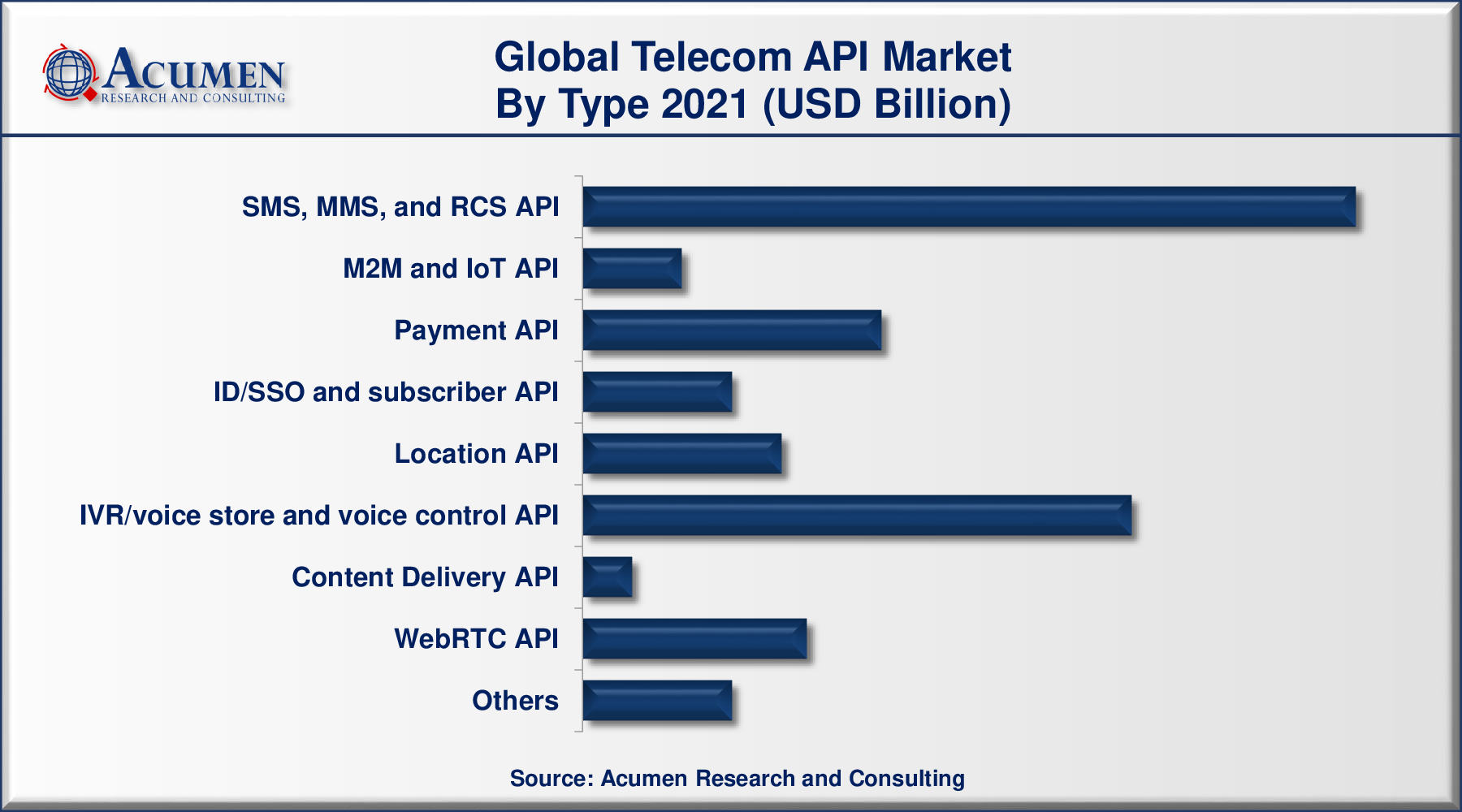 Furthermore, the IVR/voice store and voice control API segment is predicted to expand rapidly in the industry and gain significant telecom API market shares in the coming years. This market expansion can be ascribed to an augmentation in the number of BPO telecom operators, particularly in developing economies such as China, South Africa, and India. 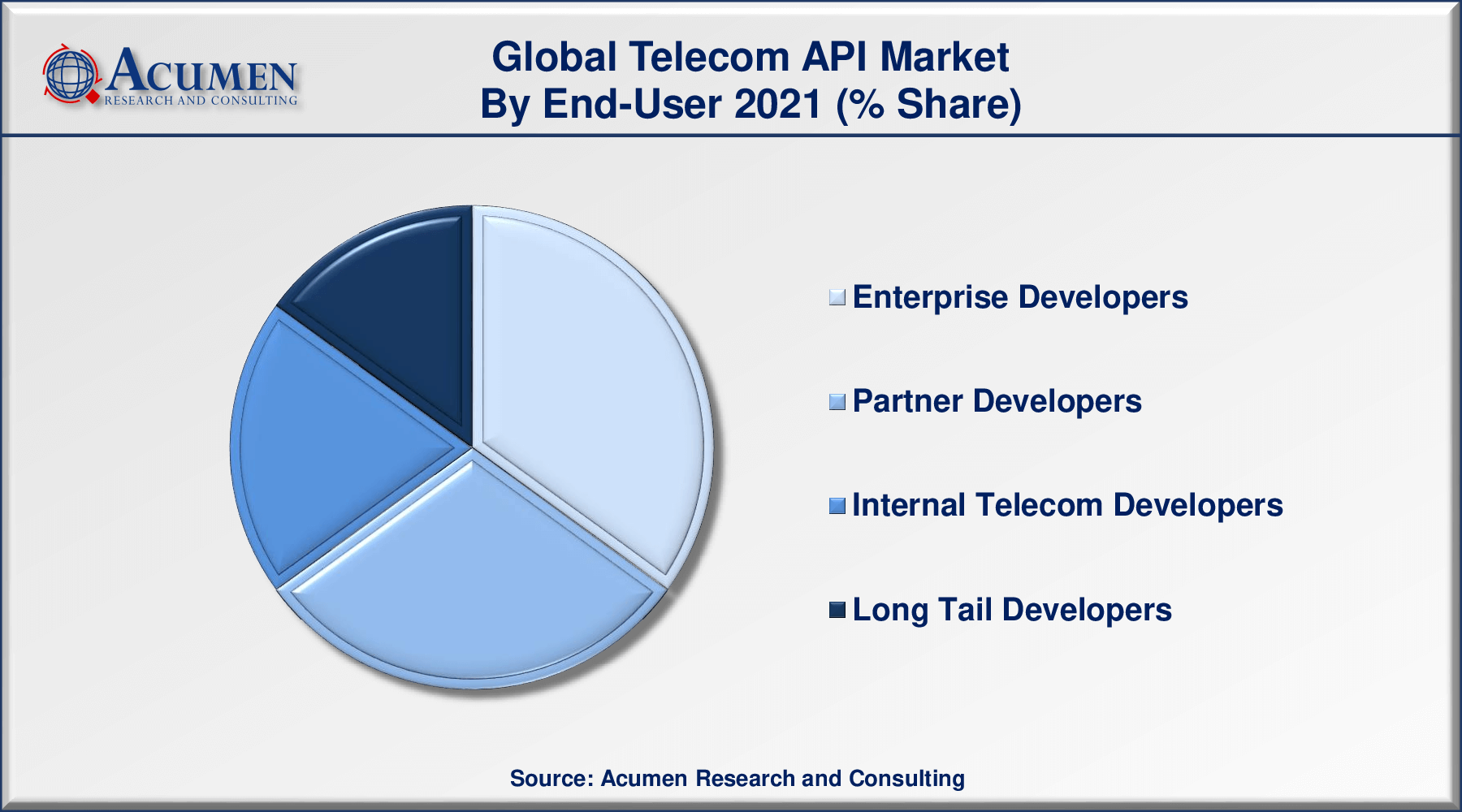 In terms of end-user, the enterprise developer segment will dominate the telecom API market in 2021. This dominance is due to large-scale organizations' high penetration and adoption rates. Standardized communication protocols to enable messaging are mostly employed in large corporations to advertise discounts, promotional events, and changes to corporate rules, among other things. Organizations primarily employ mass messaging software and tools to drive telecom API market growth.

Furthermore, the telecom API market forecast predicts that the partner developer segment will increase at a rapid pace in the future years. Partner APIs aid in the development of an individual data service platform among CSPs and other developers in order to establish services such as payment as well as streaming platforms, among others. Moreover, when compared to corporate developers, the market share for the partner developers segment is rapidly rising, resulting in their development over the predicted period.

Continuous Improvements in the IT and Telecom sector in Asia-Pacific, Drives Regional Market Expansion

Geographically, the Asia-Pacific region is expected to see considerable market growth in the next years. This growth is due to an increase in the number of mobile phone users as well as the increased deployment of 5G technologies in the region over the coming years. Furthermore, the region's Telecom API market is being driven by the steady increase in demand for 4G/LTE. Another factor that is predicted to increase the Asia-pacific industry for Telecommunication APIs is the growing number of mobile phones and M2M devices. Besides that, the rapid advancement of information technology has substantially increased demand for telecom application programming interfaces (API), with Asia-Pacific experiencing the fastest growth rate in the telecom API market.

How much was the global telecom API market size in 2021?

The global telecom API market size in 2021 was accounted to be USD 221 Billion.

What will be the projected CAGR for global telecom API market during forecast period of 2022 to 2030?

Which region held the dominating position in the global telecom API market?

North America held the dominating share for telecom API during the analysis period of 2022 to 2030.

Asia-Pacific region exhibited fastest growing CAGR for telecom API during the analysis period of 2022 to 2030.

What are the current trends and dynamics in the global telecom API market?

Rapidly increasing proliferation of mobile internet and cloud technologies and growing network access to the 4G LTE network are the prominent factors that fuel the growth of global telecom API market.

Based on type, SMS, MMS, and RCS API segment held the maximum share for telecom API market in 2021.