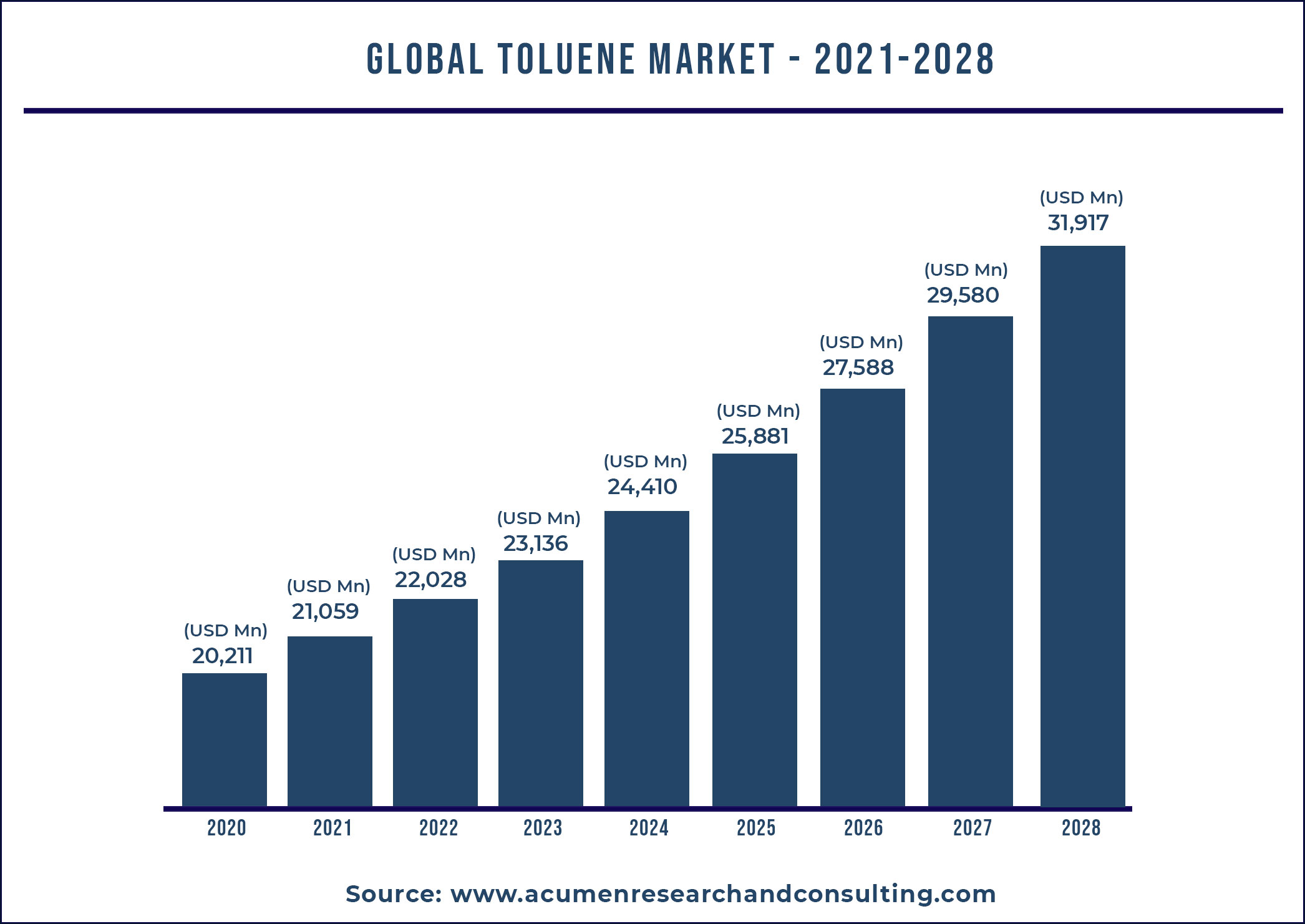 Toluene (C7H8)is a colorless liquid chemical compound. It is also a liquid aromatic hydrocarbon that resembles benzene. Formerly known as toluol or methylbenzene, it has a sweet taste and odor and is highly flammable. It is an active ingredient in items used in building, cosmetics, and fuel manufacturing, and it may be found in a range of industries around the world.

The toluene sector and its derivatives have suffered a drop in demand as a result of the COVID-19 pandemic due to logistics, economic disruptions, and a disrupted supply chain. The government's restrictions on transportation and manufacturing, as well as the potentially infected workforces, would add a new dimension to the calamity. However, the market is expected to recover in the coming years as many end-use industries that require toluene as a raw material have started at full fledge.

The primary factor driving the growth of the global toluene market is its increasing demand in several end-user industries. Toluene and its derivatives are used in end-user industries such as automotive, building & construction, oil & gas, consumer goods, and many others. Toluene is used in the manufacturing of paints and coatings, inks, adhesives, resins, and pharmaceuticals, and a cleaning solvent in the coating, printing, and leather industries. Additionally, the growing usage of toluene as a solvent has also added to its budding market size. Toluene is a functional solvent in organic chemistry because, unlike water, it can dissolve a wide range of organic compounds and is a safer alternative to benzene due to its reduced toxicity. The ever-growing petrochemical industry is another factor that is boosting the stable growth of the industry, as most toluene produced is derived from petroleum fractions. However, the industry faces certain constraints such as limitations in the sourcing of toluene, and growth in diesel's demand against gasoline. These factors are likely to hold back the growth of the global toluene market. Furthermore, the production of toluene from shale gas and the growing dyes industry are some factors that are giving a significant push to the market growth in the coming years. 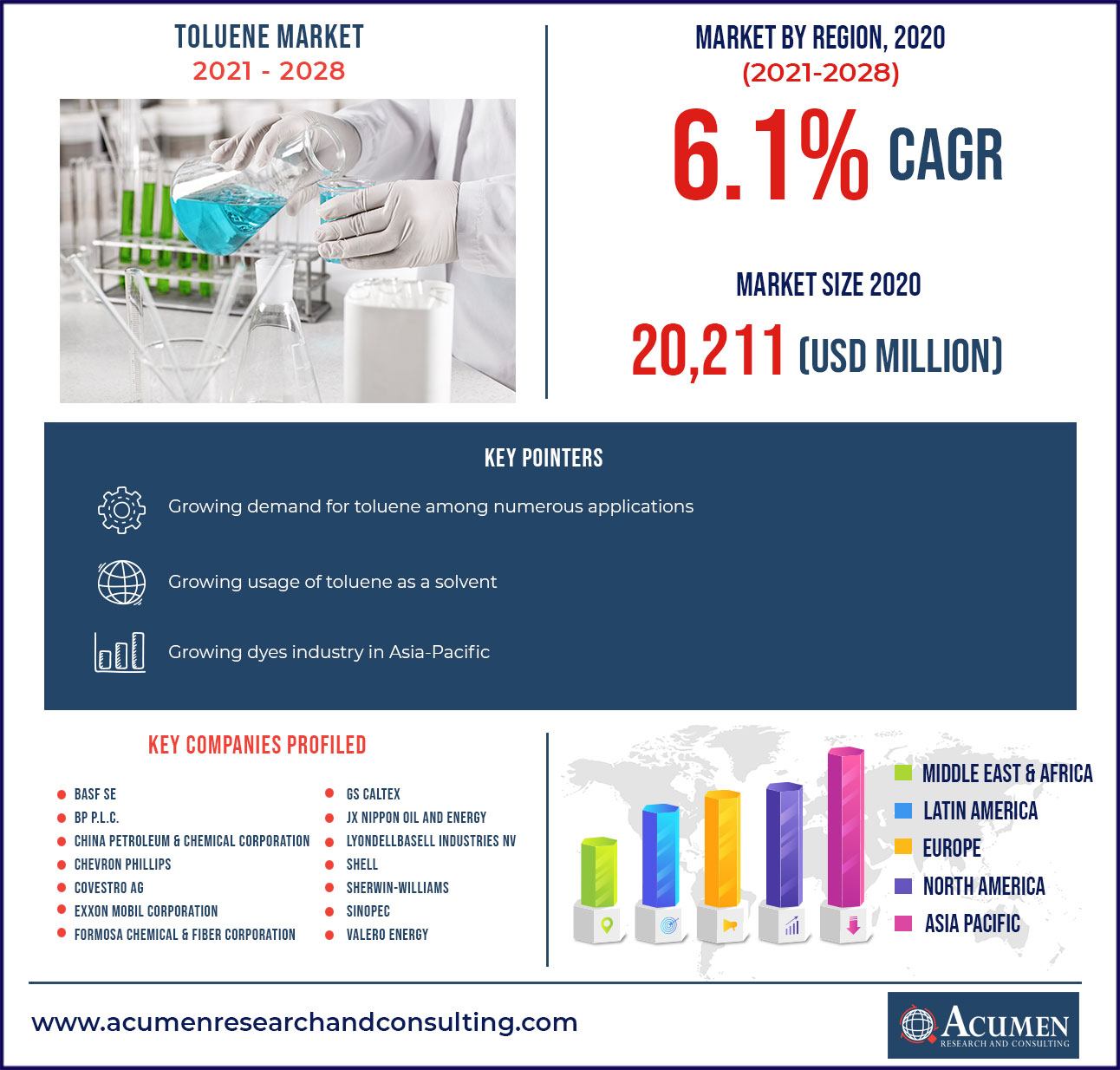 The global toluenemarket is segmented based on derivative type, production process, application, and region.

Among derivative types, the benzene and xylene segments obtained the highest shares in 2020. The high growth in the segment is attributed to the growing demand for its derivatives such as polystyrene and polyethylene terephthalate in various applications. Benzene and xylene are likely to drive the market for benzene and xylene throughout the forecast period, with xylene's expanding use in paints and coatings, as well as benzene's growing use in textiles and plastics.

In 2020, the reformate process gathered a considerable amount of share in the production process segment. Toluene is created by passing a hydrocarbon mixture over a dehydrogenation catalyst in a catalytic reforming process. Hydrocarbon gases are extracted from the reformate, and an aromatic-rich fraction is produced. Distillation or solvent extraction is then used to make toluene. Solvent extraction or distillation at various phases of the process can also be used to manufacture benzene and xylene isomers.

Among the applications, the dyes segment is expected to attain a significant growth rate throughout the forecast period 2021 – 2028. The high growth in the segment is credited to the rising demand from the APAC dyes industry. Due to the price volatility of raw materials such as benzene, dye makers in Asia-Pacific are likely to encounter unpredictable manufacturing costs. Physical retail stores and online shopping combine to create a broad distribution channel in the market. The product's availability on the internet has improved a company's customer base and demonstrated broader reach, which is expected to raise demand for the product.

The Asia-Pacific region is anticipated to dominate the market with the largest shares in 2020. Factors such as rising demand from industrial and infrastructural sector, and the increasing production of paints and coatings are fueling the APAC market growth. China is the biggest market for toluene in the APAC region. This is because China is the major producer of paints & coatings, chemicals, and adhesives in the Asia region. However, North American and European markets are expecting moderate growth throughout the forecast period 2021 – 2028.

In order to gain a significant foothold in the competitive landscape, companies in the business are engaged in a variety of strategic operations. For instance, on December 8, 2021 – ExxonMobil Chemical Company announced that it has acquired California-based Materia, Inc., a Nobel prize-winning technology-winning company for manufacturing a new class of materials. The ground-breaking materials can be used in several applications, including wind turbine blades, sustainable construction, electric vehicle parts, and anti-corrosive coatings.

On June 29, 2020 – BP said that it has reached an agreement with INEOS to sell its global petrochemicals business for $5 billion, subject to usual adjustments.

How much was the estimated value of the global Toluene market in 2020 ?

What will be the projected CAGR for global Toluene market during forecast period of 2021 to 2028?

Which region held the dominating position in the global Toluene market?

Asia-Pacific held the dominating share for Toluene during the analysis period of 2021 to 2028.

Asia-Pacific region exhibited fastest growing CAGR for Toluene during the analysis period of 2021 to 2028.

What are the current trends and dynamics in the global Toluene market?

Growing demand for toluene among numerous applications, growing usage of toluene as a solvent, and growing dyes industry in Asia-Pacific are the prominent factors that fuel the growth of global Toluene market.

By Derivative Type segment, which sub-segment held the maximum share?

Based on derivative type, benzene and xylene segment held the maximum share for Toluene market in 2020.