As the demand for virtual experiences grows, advertisers will have the opportunity to connect with much larger audiences and emotionally connect with them. In 2018, 78% of the population has heard of virtual reality technology. This figure has been gradually climbing since 2015. Virtual reality (VR) is becoming increasingly popular as a marketing tool. Some people use VR features in social apps like Snapchat, while others develop their apps. In addition to traditional physical and digital ad channels, VR advertising comprises firms designing and delivering immersive advertising experiences through VR technology. A VR advertisement takes place in a virtual 3D world where ad viewers can interact with content without being interrupted by external factors. The concept of virtual reality advertising is not new, and since the mid-2010s, luxury and future-focused firms have embraced VR to connect with customers on an emotional level and deliver rich visual experiences that would be impossible to present through traditional mediums. For example, Gucci created a virtual reality film for its Christmas and gift-giving campaign in 2017. 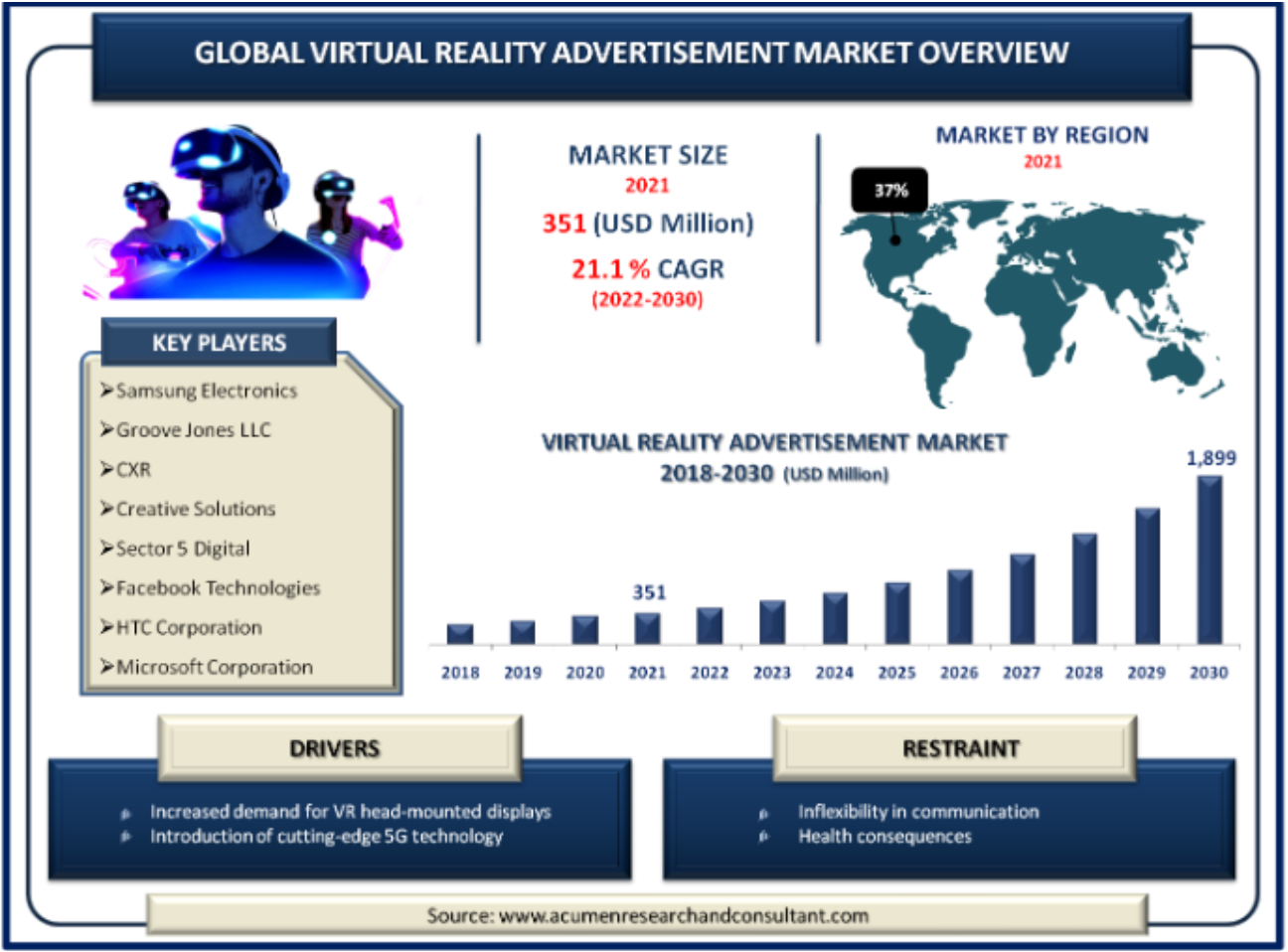 Virtual reality advertising is a digital experience of three-dimensional real-world setting for marketing purposes. To provide customers with an immersive experience, the approach employs virtual reality equipment such as headsets or glasses, gloves, and bodysuits. The global VR advertising industry is being driven primarily by the rise of the mobile gaming sector and the expansion of internet access. Furthermore, an increase in the use of consumer smart electronic devices is projected to propel the global augmented and virtual reality advertisement market forward. In addition, the use of these technologies is growing in order to attract online customers and increase sales, which is increasing the industry.

Aside from that, virtual reality may immediately engage individuals with a cause in a way that seems real and intimate. Stanford University's Virtual Human Interaction Lab discovered that utilizing VR to teach individuals about social issues enhanced empathy and prompted participants to change their behavior. Make use of this technology to raise awareness of the organization's social efforts and to raise funds for nonprofits and charities.

The advancement of 5G technologies is propelling the market forward

With 5G, new business models will be driven by technologies such as cloud computing, virtualization, artificial intelligence, edge computing, network slicing, and automation. Aside from these technologies, 5G has an impact on the VR Market and accelerates the expansion of the VR advertisement sector. 5G provides massive capacity where it is needed, as well as significantly improved connectivity, for future virtual reality. When combined with gigabit Ethernet fiber expansion, 5G will completely transform the VR advertising sector, resulting in a completely immersive experience with tactile capabilities in many applications. Furthermore, significant businesses and non-governmental organizations are focusing on the evolution of 5G as well as entirely new technologies, capabilities, and applications that will propel the market ahead. Furthermore, similar to what B4G technology accomplished for LTE, the 6G market will focus on filling 5G capability gaps and promoting the market growth.

In terms of components, the hardware segment is predicted to have the largest market share in 2021. The increasing use of tablets, smartphones, and other technologically advanced electronic devices is fueling segment growth. The hardware segment in VR includes output devices, input devices, and consoles. The increasing usage of virtual reality headsets in commercial applications, entertainment and theme parks, and other locations is expected to provide prospects for growth for OEMs. Furthermore, advances in lightweight wearable technologies are expected to fuel demand for VR head-mounted displays. However, according to market surveys, virtual reality is expected to develop tremendously in the coming years, with growth expected for VR goods, components, and various market segments.

In terms of device type, the head-mounted display (HMD) held the largest market share in 2021. HMDs are miniature displays or projection technology that are integrated into eyewear or put on a helmet or cap. Head-mounted displays are totally immersive display devices largely used for video gaming, e-learning, and other types of digital entertainment. The growing importance of virtual reality headsets in business and consumer applications is boosting segment demand. Rising consumer acceptability, as well as rising usage of augmented reality (AR) and virtual reality (VR) technologies, are key factors driving segment expansion in the virtual reality advertisement market.

During the forecast period, North America will maintain its dominance as the most appealing and largest technology market, with significant research effort in the field of VR. North America is an important region for the virtual reality industry and a pioneer in accepting technological breakthroughs, thus giving this region a competitive edge over other region. The region is home to the most startups focused on bringing groundbreaking VR advertising technology to a variety of industries. North America dominates the virtual reality advertising industry due to demand from the entertainment & media, gaming, military & defense, retail, and manufacturing industries. Furthermore, significant firms such as Google, Facebook, DAQRI, and others that supply cutting-edge solutions are headquartered in North America. As a result, these elements are driving demand for the region's market.

How much was the estimated value of the Global Virtual Reality Advertisement Market in 2021 and projection by 2030?

The estimated value of Global Virtual Reality Advertisement Market in 2021 was accounted to be US$ 351 Mn and market projected to reach US$ 1,899 Mn by 2030

What will be the projected CAGR for Global Virtual Reality Advertisement Market during forecast period of 2022 to 2030?

The projected CAGR of Global Virtual Reality Advertisement Market during the analysis period of 2022 to 2030 is 21.1%

Which region held the dominating position in the global virtual reality advertisement market?

North America held the dominating share for virtual reality advertisement during the analysis period of 2022 to 2030.

Asia-Pacific region exhibited fastest growing CAGR for virtual reality advertisement during the analysis period of 2022 to 2030.

What are the current trends and dynamics in the global virtual reality advertisement market?

Increased demand for VR head-mounted displays (HMDs) and the introduction of cutting-edge 5G technology are the prominent factors that fuel the growth of global virtual reality advertisement market.

By segment component, which sub-segment held the maximum share?

Based on component, hardware segment held the maximum share for virtual reality advertisement market in 2021.