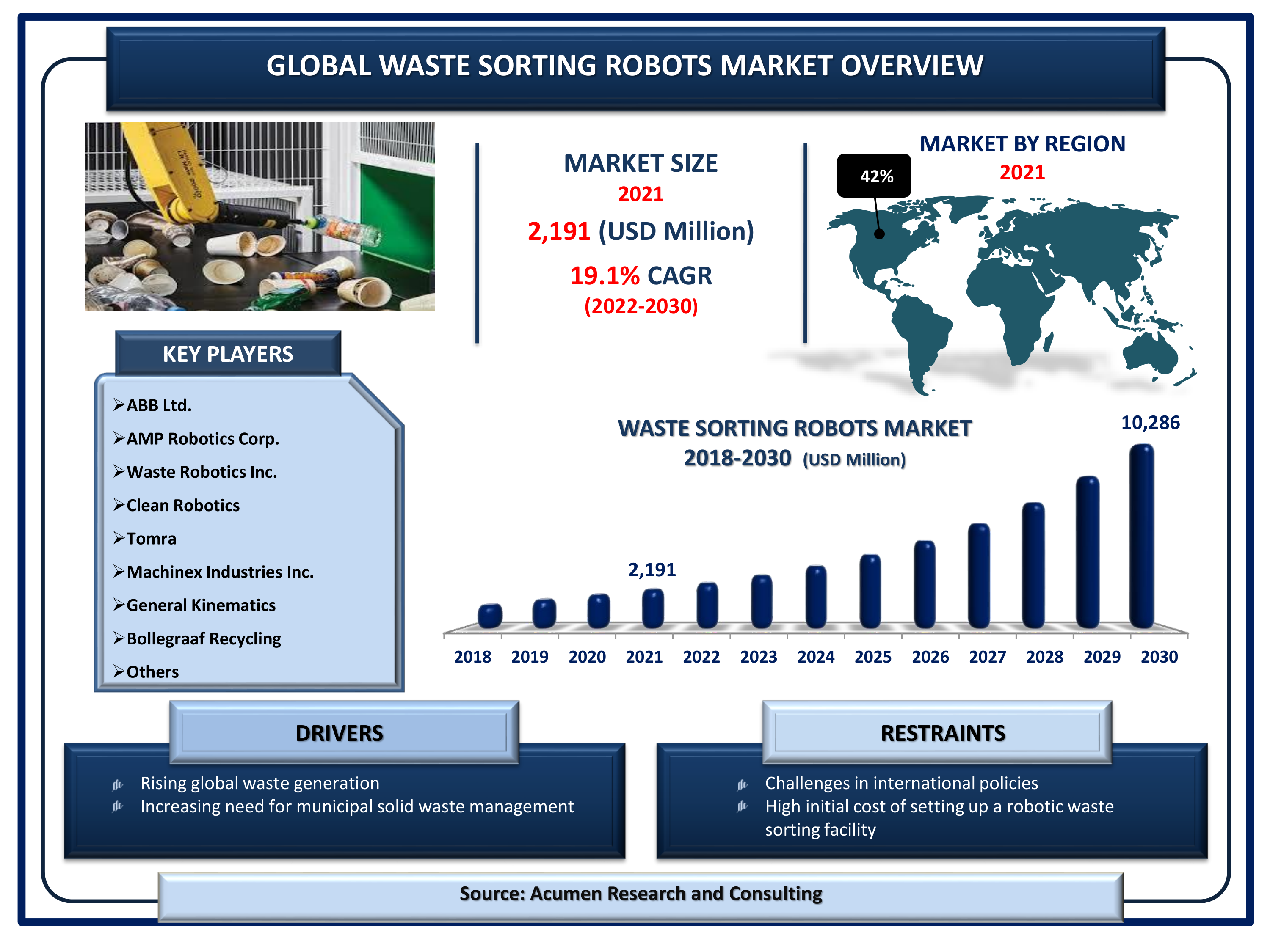 Growing digitalization across the world is the leading waste sorting robots market trend fueling the demand of the industry in the coming future. According to our waste sorting robot industry analysis, the increasing adoption of automation in numerous industries is propelling market growth. Similarly, the rising focus on proper management of waste will boost the worldwide waste sorting robots market revenue. Intelligent robotic systems can handle almost any waste stream, and sorting functionality can be redefined for each new market situation, even on a routine basis. The robotic arms are always ready to pick up and rescue manual workers from dusty and filthy workplaces, thereby increasing their demand across many industries that produce a huge amount of waste daily.

The primary factor driving the waste sorting robots market share is the rising focus on municipal solid waste management. Waste generation rates are increasing all over the world. According to World Bank data, the world generated more than 2.24 billion tonnes of solid waste in 2020, amounting to a daily footprint of 0.8 kg per person. Because of rapid population growth and urbanization, annual waste generation is expected to rise by 73% from 2020 levels to 3.88 billion tonnes by 2050.

Another factor contributing to the growth of the industry includes the rising need for global waste management. As a result, rising awareness about waste generation and disposal is boosting industry growth.

The demand for rapid waste management procedures to handle the increasing amount of garbage produced is a major driving force behind the increased market share of waste sorting robots. The picking speed of the robots ranges between 3,000 and 6,000 picks per hour, and they can operate 24/7 with a 98% accuracy rate. Thus, the rapid adoption of waste sorting robots can be witnessed across industries.

The high initial cost of setting up these facilities and huge maintenance costs are major challenges for the waste sorting robots industry. Manual sorting is still required to properly recognize metals from paper, plastics, and wood products, regardless of how extensive the presort process is. Because the manual labor portion of the sorting process could be hazardous to workers, artificial intelligence has been applied to this application.

Furthermore, the rising technological advancement combined with the rising emphasis on automation and artificial intelligence (AI) is some of the aspects that are expected to create numerous growth prospects throughout the forecast timeframe from 2022 to 2030. The future of AI is rapidly approaching, and the day will soon come when waste processing will be fully automated. Robotic waste pickers will sort the trash, and AGVs will move bins full of the trash to the compactor, where it will be automatically compressed and packaged before being moved to the shipping docks, where an automated guided vehicle (AGV) will load an 18-wheeler trailer. 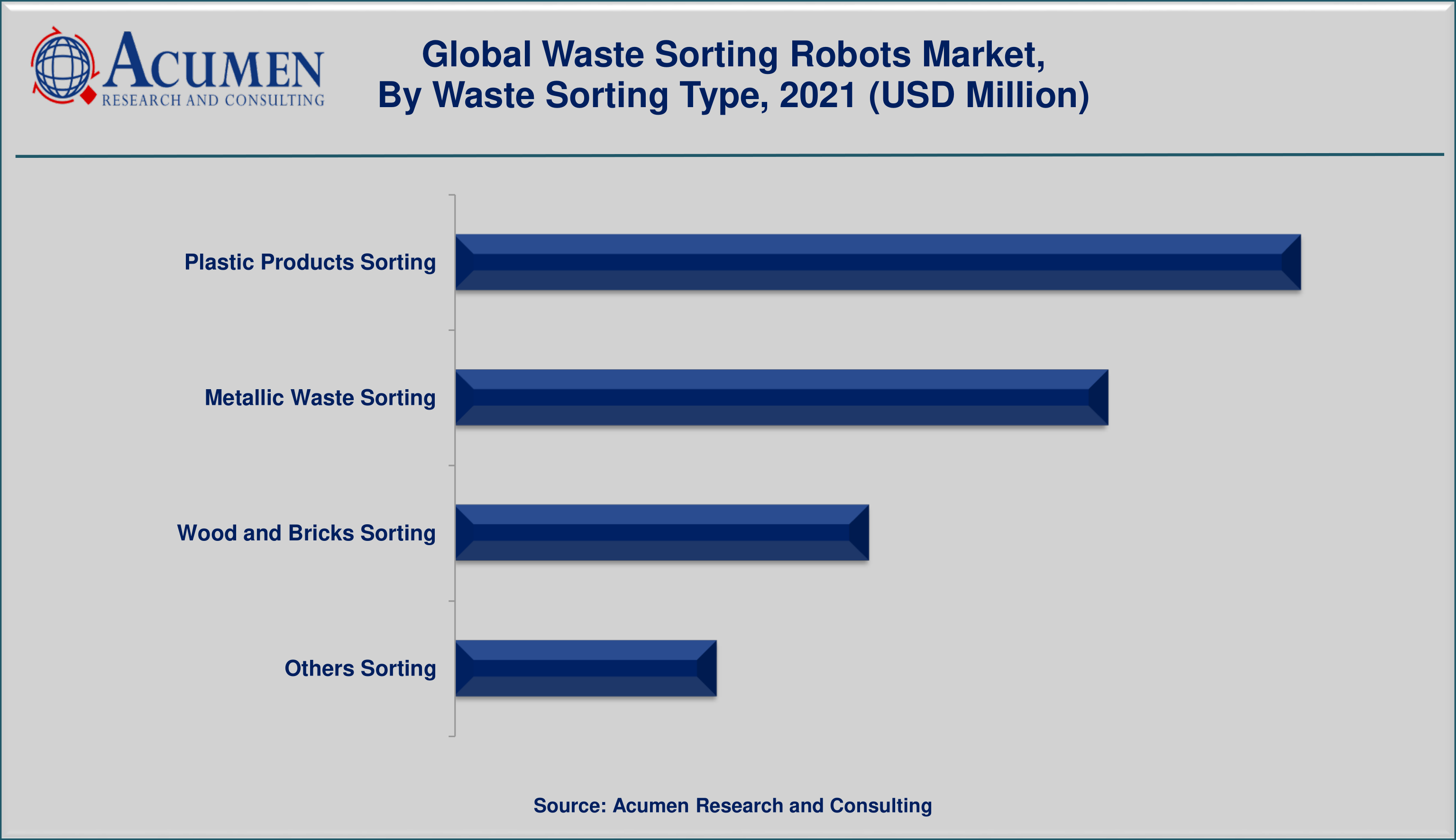 Based on our waste sorting robots market forecast, the plastic waste sorting waste sorting type is expected to achieve a remarkable market share all through the projected timeframe from 2022 to 2030. In 2016, the world produced 242 million tonnes of plastic waste, accounting for 12% of all municipal solid waste. Plastic waste is becoming more visible as a result of its accrual in recent decades and its critical impact on the nearby environment and human health. Plastic, in contrast to organic waste, can take hundreds to thousands of years to disintegrate in nature. Plastic waste causes flooding by clogging drains, causes respiratory problems when burned, shortens animal lifespans when consumed, and pollutes water sources when dumped into canals and oceans. 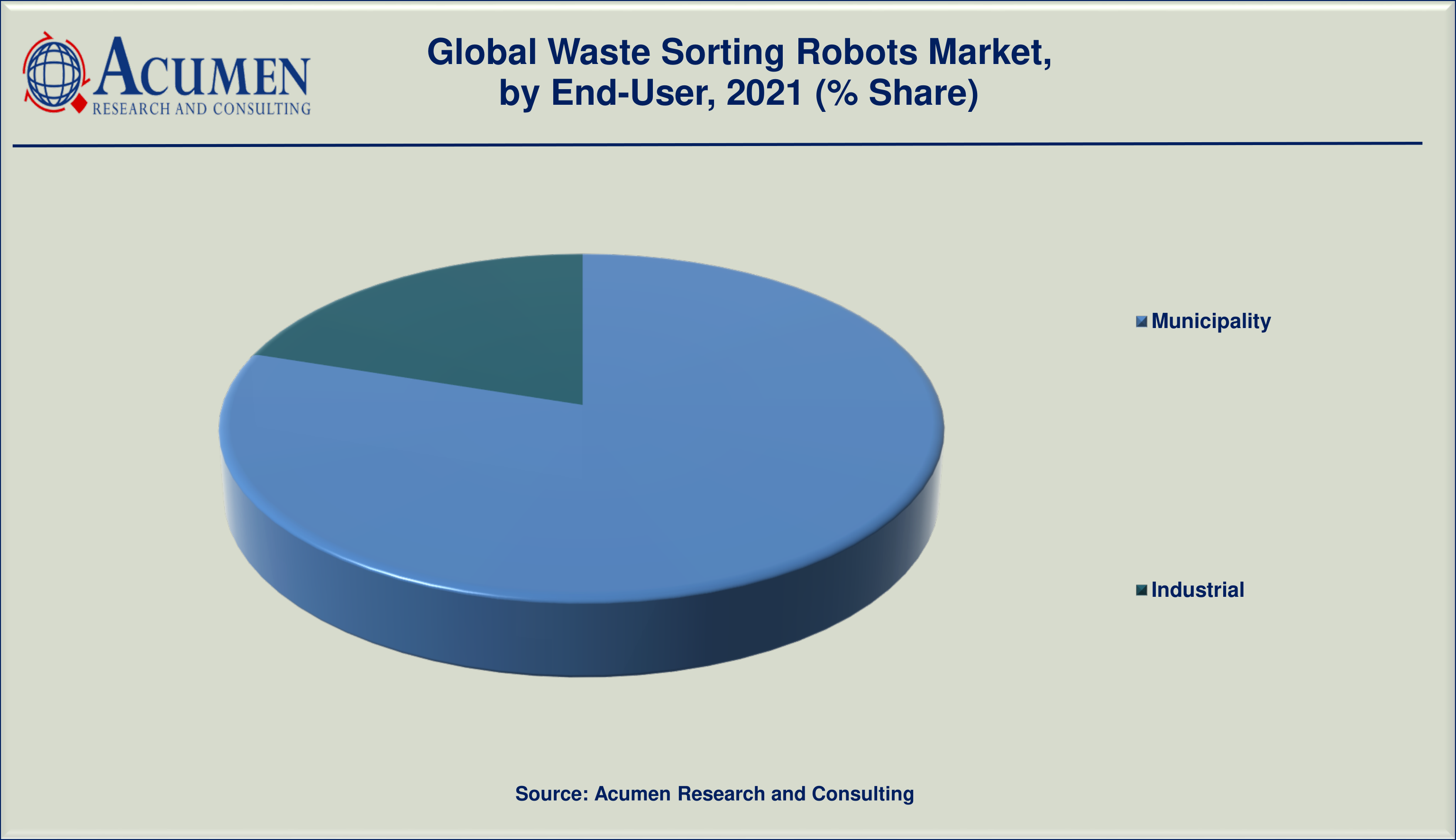 According to our waste sorting robots industry analysis, the municipal waste segment achieved a considerable amount of share in 2021. The increasing need for municipal solid waste management as a result of urban waste generation is likely to drive up demand for waste sorting robotic industry. According to The World Bank’s What a Waste 2.0 report, 2.01 billion tonnes of solid municipal waste are generated each year, with 33 percent of that waste not being managed in an environmentally safe manner. On the other hand, industrial waste is anticipated to witness the fastest growth rate in the approaching years. The increase in industrial waste due to various end-markets for example manufacturing, construction, and textiles is expected to positively contribute to market growth.

Increasing consumption of products that are dangerous to the environment in North America, fuels the regional market growth

According to our analysis, the global waste sorting robots industry is dominated by North America. The strict regulatory guidelines in the region, fastest adoption of robotics in the industrial sector, growing investments, and technological advancements in the US and Canada would help to generate numerous growth opportunities for the North America waste sorting robots market. On the other hand, the Asia-Pacific region is likely to witness a substantial growth rate due to the rising number of robotic instruments in China. Furthermore, the rising waste generation from countries such as China, Japan, and South Korea, and growing environmental and waste management concerns are also supporting the Asia-Pacific waste sorting robots market.

How much was the global waste sorting robots market size in 2021?

The global waste sorting robots market size in 2021 was accounted to be USD 2,191 Million.

What will be the projected CAGR for global waste sorting robots market during forecast period of 2022 to 2030?

Which region held the dominating position in the global waste sorting robots market?

North America held the dominating waste sorting robots during the analysis period of 2022 to 2030.

What are the current trends and dynamics in the global waste sorting robots market?