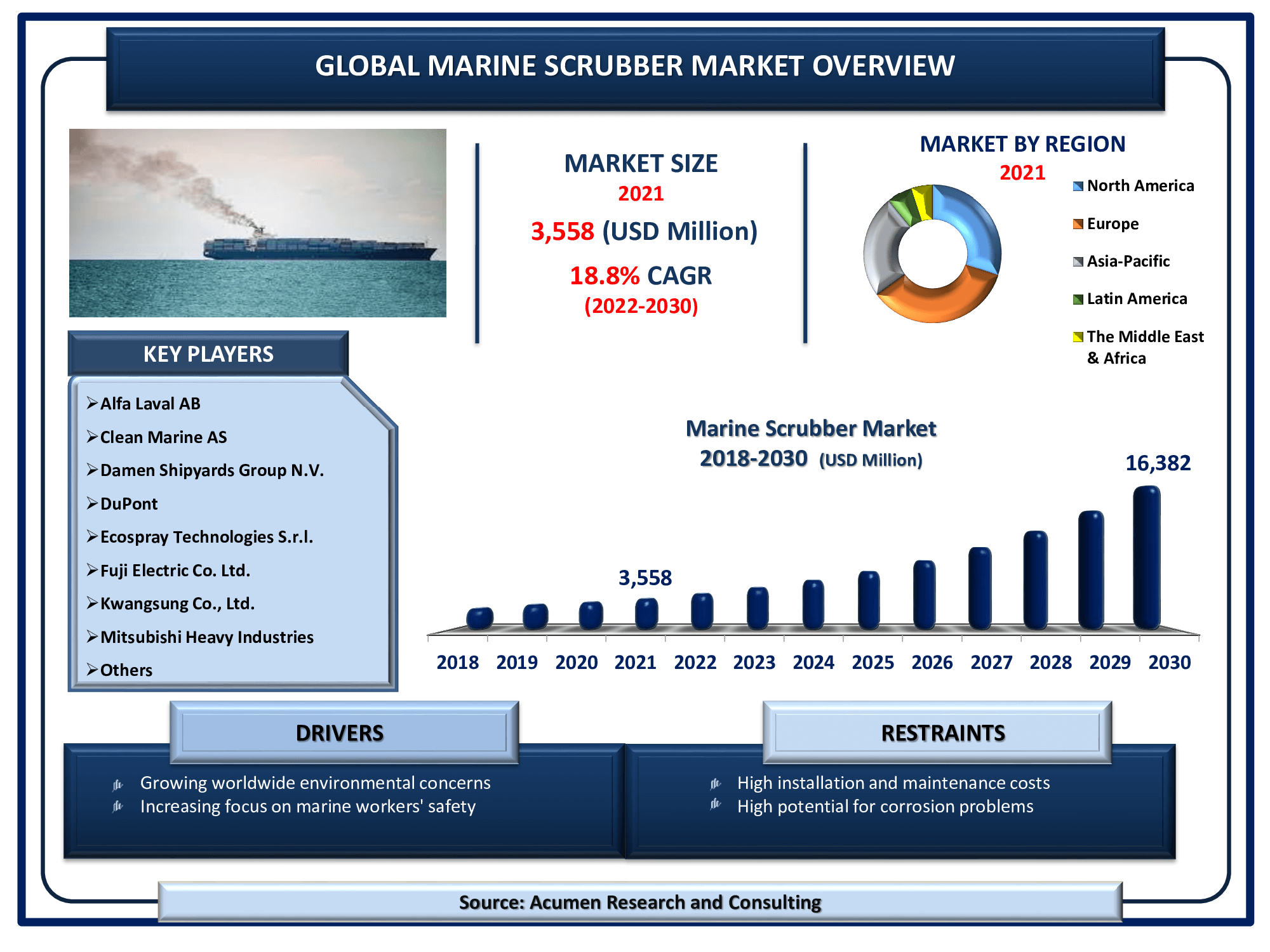 Marine scrubbers are critical systems for removing hazardous components from exhaust fumes. Marine scrubbers, also known as exhaust gas cleaning systems (ECGS) or SOx scrubbers, are primarily concerned with lowering sulfur emissions into the environment. The introduction of stringent environmental laws in the maritime industry to reduce sulphur oxide emissions is driving the global marine scrubber market revenue. The International Maritime Organization (IMO) and European Commission are the two major regulatory bodies that are focusing on reducing sulphur emissions from the marine industry. The installation of a marine scrubber or exhaust gas cleaning system will almost certainly lower the sulphur level from 3.5% to 0.5%. The discharge of sulphur oxides (SOx) and nitrogen oxides (NOx) from exhaust gases produced by the combustion process in maritime equipment is rapidly expanding the marine scrubber market growth. Additionally, according to our marine scrubber industry analysis, increasing environmental concerns is expected to boost the market further throughout the predicted period of 2022 to 2030.

The increased environmental concern is one of the primary factors driving the need for marine scrubbers. Maritime transportation has a direct impact on air quality in many coastal communities worldwide. Ship exhaust gases contribute significantly to air pollution, particularly sulphur oxide emissions from fuel oil combustion. Sulphur oxide emissions can be reduced to prevent acid rain and ocean acidification. Ships have typically used fuel oils with a sulphur concentration of up to 3.50% for propulsion. This level of sulphur oxide emission is damaging people's health and the environment; hence the demand for marine scrubbers is skyrocketing across the maritime sector.

Growing health concerns among those exposed to sulphur oxide or nitrogen oxide are also prompting maritime players to quickly integrate marine scrubbers into their existing systems. Sulfur oxides are toxic to the human respiratory system and make breathing difficult, leading to pulmonary and cardiovascular illness. In addition, rising application of hybrid marine scrubber technologies due to their advantages is one of the important trends in the marine scrubber market. However, a high installation and maintenance cost of marine scrubber would restrict the market from growing. Furthermore, the growing strict regulatory guidelines to reduce sulphur oxide emissions are anticipated to generate numerous growth opportunities for the market in the coming years.

Based on technology, the wet scrubber technology sub-segment dominated the market with the highest market share since it is the most common and recognized as the most efficient. The scouring liquid used within a wet scrubber may be freshwater or seawater with chemical additions. Caustic soda (NaOH) and limestone are the most widely utilized additions (CaCO3). Wet scrubbers are further classified as closed-loop, open-loop, or hybrid. Ships can use closed-loop systems to collect accumulated sludge on board for eventual disposal at a suitable in-port facility in ports and areas where open-loop scrubbing is forbidden. Hybrid scrubber systems, on the other hand, can work in either closed-loop or open-loop modes, providing greater flexibility.

According to our marine scrubber market forecast, LNG and MGO are the most favored and widely utilized fuels in place of HFO because they are good fuels with lower carbon dioxide (CO2), sulphur oxide (SOx), and nitrogen oxide (NOx) emissions than HFO. Marine Gas Oil, or MGO, is a high-quality marine fuel made entirely of distillates. All of the components of crude oil that vaporize during distillation and are later condensed from a gas into liquid are referred to as distillates. As a result of increased environmental concerns and rigorous regulatory frameworks for emissions, MGO and LNG fuel types are expected to gain popularity in the next years. 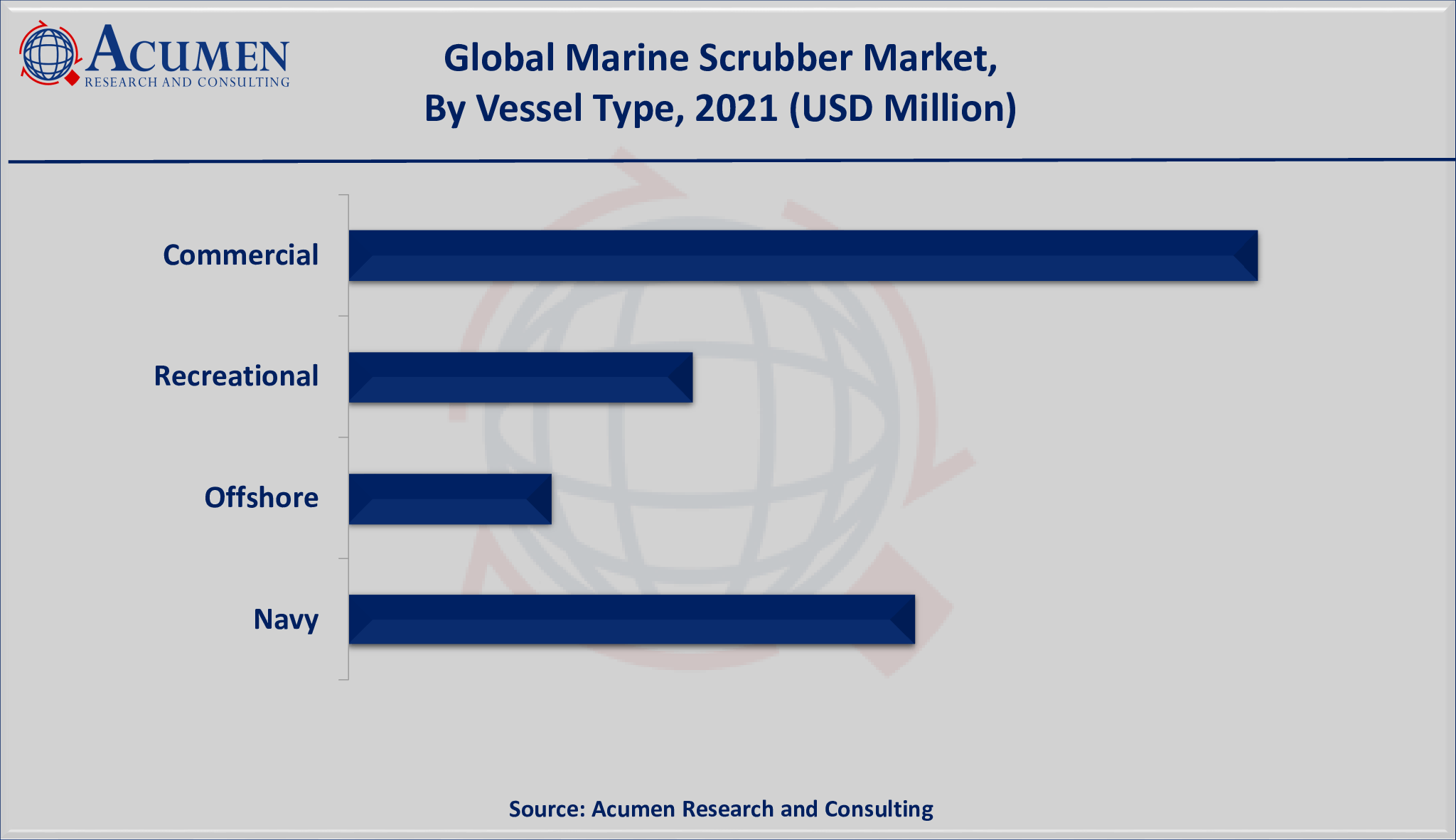 According to our marine scrubber industry analysis, the commercial sub-segment will account for a sizable market share between 2022 and 2030. The growing need to meet increased logistics demand, especially from the commercial sector, is expected to improve the business picture. In addition to that, the rising number of cross-border transportation, increasing oil & gas sector, and rising international trading are some of the aspects that are driving the commercial marine scrubber market demand. 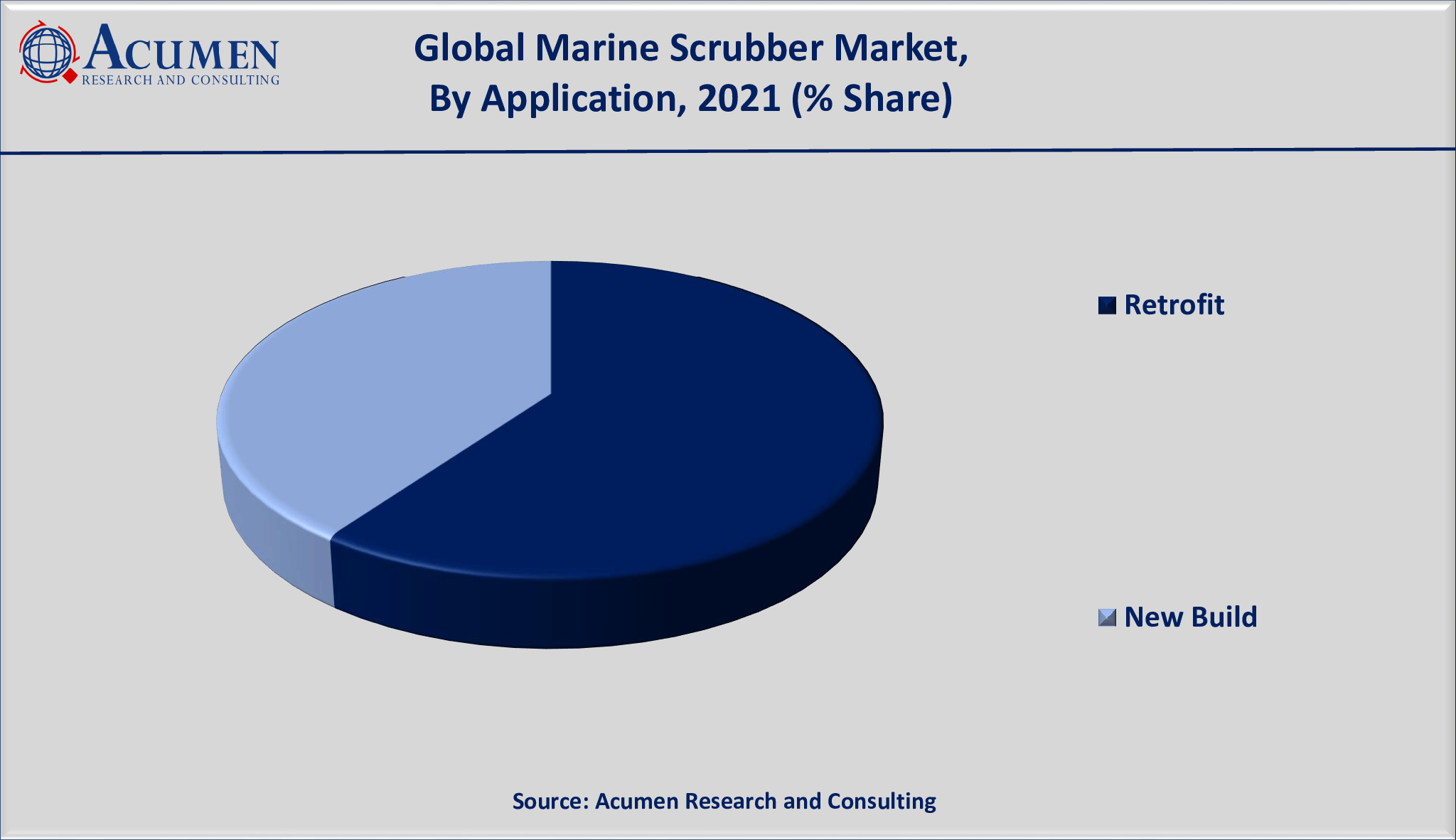 Retrofit vessels occupied a considerable marine scrubber market share in 2021 and are expected to do so in the future years. Following the immediate IMO sulphur cap of 0.5%, which takes effect on January 1, 2020, the existing fleet of vessels will either install marine scrubber systems or switch to low-sulfur fuels. As a result, many vessel owners are enthusiastic about the prospect of retrofitting their boats with marine scrubber systems in order to comply with the 2020 global IMO legislation. New construction applications, on the other hand, are predicted to develop at the fastest rate in the following years, from 2022 to 2030.

According to our geographical analysis of the marine scrubber business, Europe occupied a substantial market share in 2021 and will continue to do so in the future. The region's rapid expansion can be attributed to the presence of tight EU laws as well as the presence of some of the world's major commercial shipping line owners in the region. Through the Sulphur Directive, the EU has taken significant action to limit the sulphur content of marine fuels since 2012. Furthermore, the EU has worked hard to play an active role in addressing maritime emissions more broadly, both at home and worldwide.

In terms of growth, the Asia-Pacific area is expected to experience the fastest growth between 2022 and 2030. The growing industrialization in this region is attributed to the shifting propensity of end consumers toward commercial applications. Aside from that, increasing shipbuilding activities, primarily in China, Japan, and South Korea, as well as the introduction of regional pollution reduction programmes, will continue to incorporate product deployment.

How much was the estimated value of the global marine scrubber market in 2021?

The estimated value of global marine scrubber market in 2021 was accounted to be USD 3,558 Million.

What will be the projected CAGR for global marine scrubber market during forecast period of 2022 to 2030?

Which region held the dominating position in the global marine scrubber market?

Europe held the dominating marine scrubber during the analysis period of 2022 to 2030.

Asia-Pacific region exhibited fastest growing CAGR for marine scrubber during the analysis period of 2022 to 2030.

What are the current trends and dynamics in the global marine scrubber market?

By Technology segment, which sub-segment held the maximum share?

Based on technology, wet technology segment is expected to hold the maximum share marine scrubber market.