Mastopexy, also known as breast lift, is a cosmetic breast surgery procedure that lifts the breasts. Its general idea is to lift and shape sagging or ptotic breast while minimizing visible scars. The procedure also eliminates excess skin around the breasts and shrinks the areola — the pigmented circle around the nipple. Breast sagging can occur with aging, hormonal changes, breastfeeding, and weight loss. Mastopexy is generally less painful than other cosmetic breast operations and requires little follow-up care. This treatment is performed with extreme caution since plastic surgeons must assure the tissue viability of the nipple-areola complex (NAC) in order to ensure the functional sensitivity of the breasts for breastfeeding and lactation. 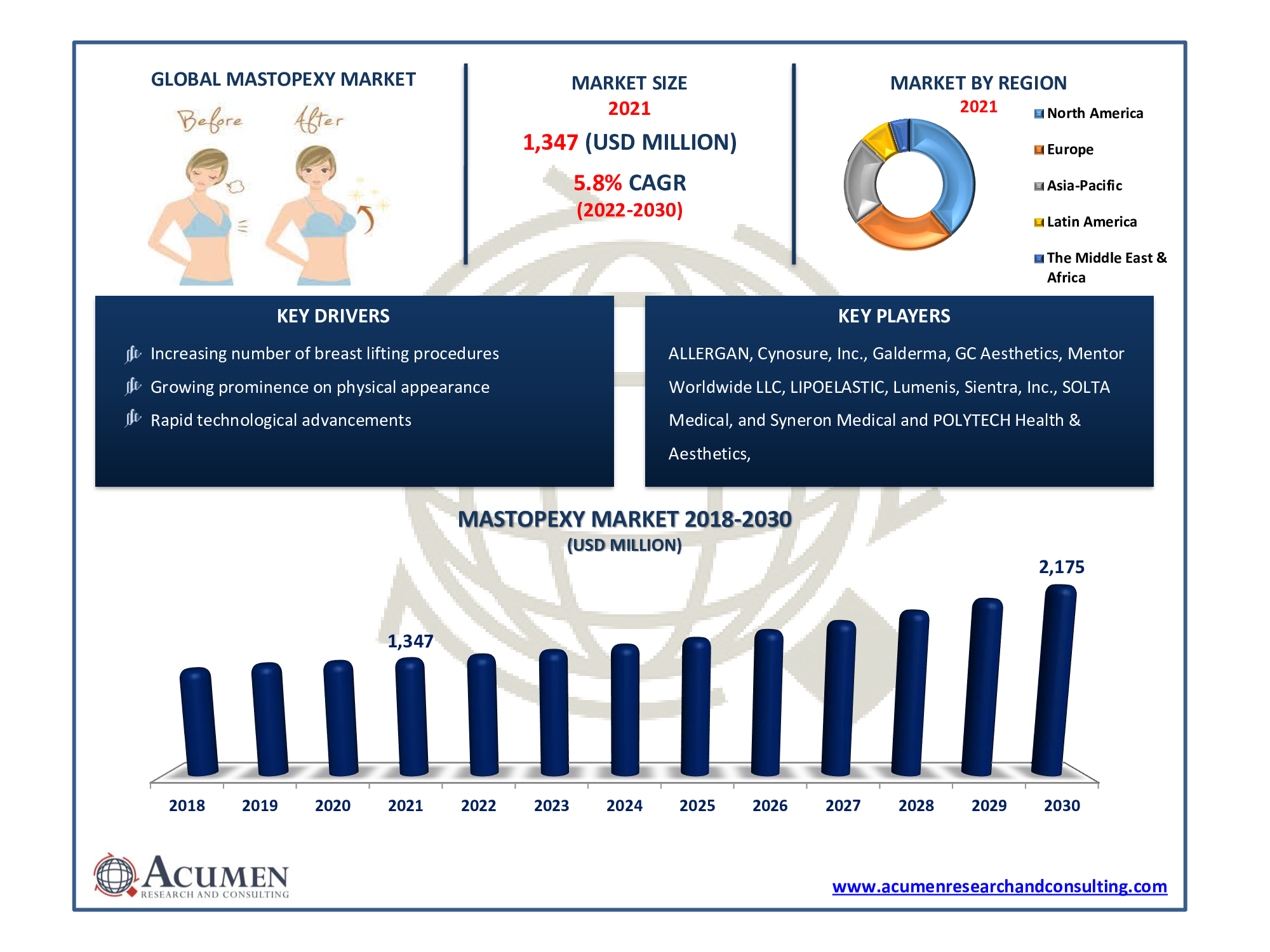 The growing number of breast lifting procedures across the world is the primary factor boosting the growth of the global mastopexy market. The American Society of Plastic Surgeons (ASPS) data shows sustained growth in cosmetic surgeries over the last few years. In 2017, 17.5 million surgical and minimally invasive cosmetic operations were performed in the United States, according to yearly plastic surgery procedural statistics. Among them, more than 100,000 mastopexies were performed in the United States.

The growing prominence of physical appearance is another leading factor that is expanding the mastopexy market share. Psychologically, a mastopexy treatment to address breast ptosis is not recommended by a medical cause or a physical reason, but by the woman's self-image; that is, the woman's combination of aesthetic, physical, and mental health requirements. Thus, the trend of aesthetic procedures has been on a boom, especially the population of developed nations.

Mastopexy is typically required for older females as their breasts sag with age. Breasts of breastfeeding mothers and pregnant women sag as a result of their situations. However, due to post-surgery problems, these operations are not performed on these women. Post-surgery complications of mastopexy are expected to hinder the market growth for a noteworthy period of time. Some of the most common complications that have been observed in women are scarring on breasts, changes in nipple or breast sensation, and difficulty in breastfeeding. Furthermore, developing healthcare infrastructure along with increased technological advancements in the aesthetic industry is predicted to reverse the trend, resulting in various growth prospects for the market in the approaching years.

The global mastopexy market is segmented based on technique, end-use, and geography. 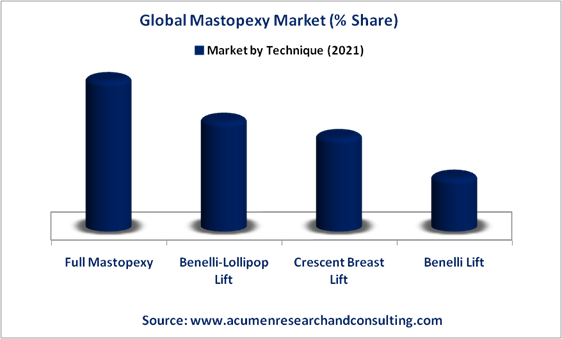 Breast lifts are performed by surgeons using a variety of techniques. The technique used by doctors is determined by the size and form of breasts, as well as the amount of lift required. Based on these techniques, the full mastopexy segment achieved the maximum market share in 2021. This technique is popular among elderly women and due to the growing population of elderly women the segment is expected to lead the market in the coming years. On the other hand, the benelli lift segment is anticipated to attain the fastest growth rate throughout the forecast period 2022 – 2030. 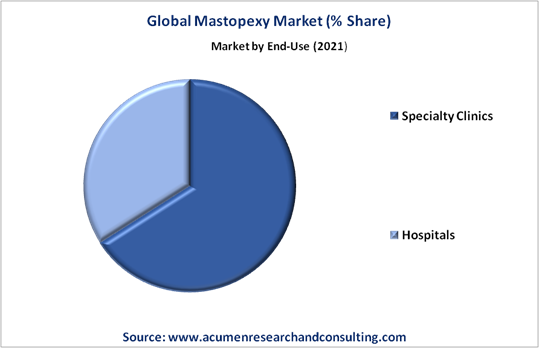 Out of these, the specialty clinics segment held the largest mastopexy market share in 2021 as these procedures are mostly carried out by private plastic surgeons. Additionally, the specialty clinics are also anticipated to register the fastest CAGR throughout the forecasted timeframe. The growing number of specialty clinics leads to easy access to mastopexy procedures without having the need to wait for prolonged waiting times as witnessed in hospitals. Furthermore, this market is profitable since women are becoming more conscious of breast enlargement surgeries.

The regional segmentation is given as North America, Latin America, Asia-Pacific, Europe, and the Middle East & Africa (MEA). According to a regional study, the North America region earned the majority of market revenue in 2021 and is expected to continue in the next years. Some of the factors driving regional growth include the rising geriatric population and increased healthcare expenditure. According to the American Society of Plastic Surgeons figures, Americans are resorting to new and imaginative ways to shape their bodies, with minimally invasive cosmetic operations increasing nearly 200 percent since 2000. The second-largest mastopexy market is occupied by Europe. This is majorly due to the increasing demand for aesthetics, increased per capita income, and the presence of advanced healthcare facilities in countries such as Germany, the UK, and France.

Meanwhile, the Asia-Pacific region is expected to develop at the quickest CAGR over the next few years. The market for the Asia-Pacific region is growing due to the changing lifestyle among the population, increasing awareness about women's health, and surging investments in the healthcare sector. Moreover, this region has also witnessed a growing number of cosmetic procedures in countries such as Thailand, Australia, and Malaysia among others. Thus, the Asia-Pacific mastopexy market revenue is expanding at the fastest rate.

How much was the estimated value of the global Mastopexy market in 2021?

The estimated value of global Mastopexy market in 2021 was accounted to be US$ 1,347 Mn.

What will be the projected CAGR for global Mastopexy market during forecast period of 2022 to 2030?

Which region held the dominating position in the global Mastopexy market?

North America held the dominating share for Mastopexy during the analysis period of 2022 to 2030.

Asia-Pacific region exhibited fastest growing CAGR for Mastopexy during the analysis period of 2022 to 2030.

What are the current trends and dynamics in the global Mastopexy market?

By segment technique, which sub-segment held the maximum share?

Based on Technique, full-mastopexy segment held the maximum share for Mastopexy market in 2021.