Estimates show that the global production of plastic is set to increase by 3.8% every year until 2030, with less than 5% of the plastic manufactured being recycled each year. As a result, 95% of the plastic is wasted, and the majority of it ends up in the ocean, posing a disruption to marine ecosystems. Finally, scientists have found a way to utilize the majority of plastic waste to convert it into fuel. 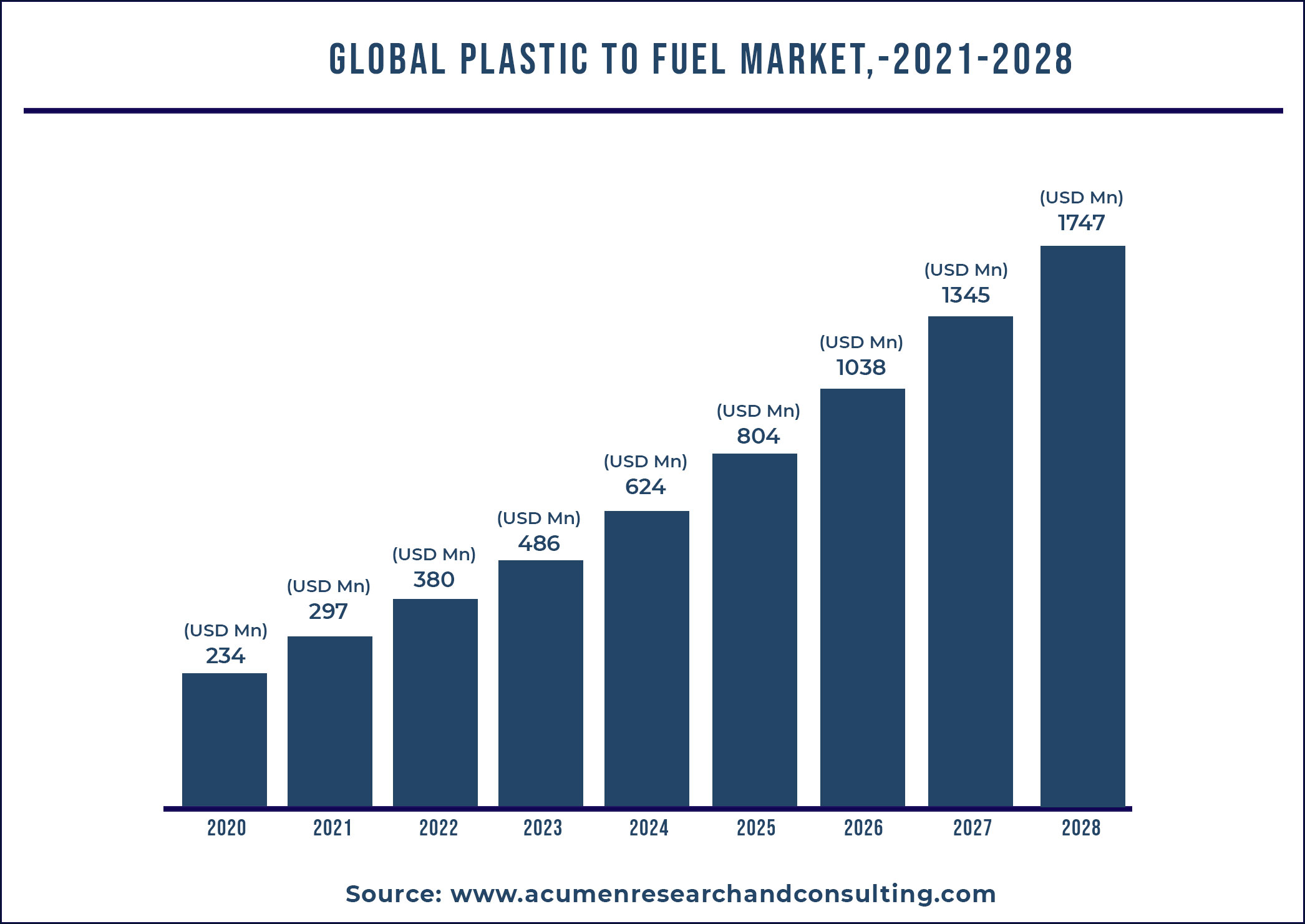 Some of the factors driving the growth of the global plastic-to-fuel market are the increasing need for the generation of energy from waste, growing concerns towards a clean environment, and rising demand from the recycling industry. Additionally, growing public awareness for greenhouse gas emission (GHG) is boosting the global plastic to fuel market share. For instance, according to the data released by the United States Environmental Protection Agency (EPA) states that the greenhouse gases emitted by human activities are majorly by the gas sector and the economic sector. In the gas sector, carbon dioxide acquired 65% of the share while by the economic sector the electricity & heat production occupied 25% of the share. The energy requirements are expected to rise exponentially post COVID-19, thus the plastic to fuel market will witness a significant boost in the coming years.

However, the requirement of high capital to start a business, and lack of awareness in emerging countries could limit the market's growth. Currently, it costs more than 4,000 USD to recycle one ton of plastic bags. To avoid these high costs, many people burn plastic or dispose of it in landfills. Conversely, on-going research & development to minimize the installation cost of plastic to fuel generation plant will help small and medium players to invest into the market, eventually driving the market. Furthermore, favorable government support in the form of subsidies and tax benefits will add to the market's profitability in the coming years. 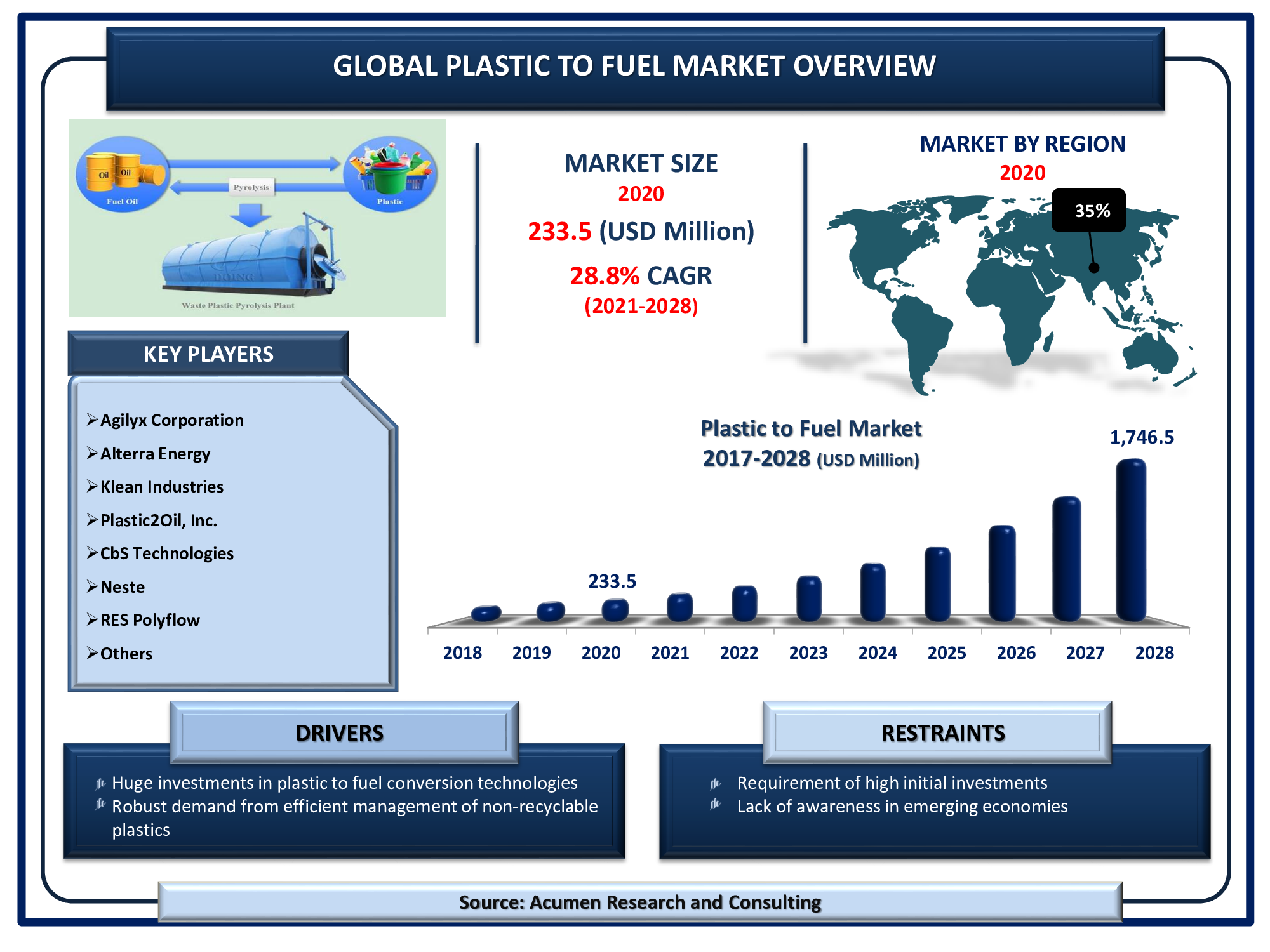 The global plastic to fuel market is segmented based on technology, end-fuel, and region. Based on the technology segment, the market classifies as pyrolysis, depolymerization, and gasification. The end-fuel segment is further categorized into hydrogen, sulfur, crude oil, and others.

Among technology, the pyrolysis segment dominated the market with largest share in 2020. At present, pyrolysis technology is mostly used in waste plastic management instead of landfill or granulation recovery, because it can convert various types of waste plastics to fuel oil. This not only effectively manages waste plastic but also provides a significant economic benefit. Thus, with such a benefit, the waste plastic pyrolysis oil project grows in popularity and favor among customers from all walks of life.

By end-fuel, crude oil contributed to the major market share in 2020. The widespread use of crude oil derived from plastic in automobiles, power generators, ships, boilers, and construction vehicles and equipment propels the market growth in the coming years. For instance,a team of researchers from Illinois Sustainable Technology Center in collaboration with the U.S. Department of Agriculture successfully converted plastic bags into fuel in 2016. They used high-density polyethylene bags to create plastic crude oil (PCO) in the process.

In 2020, the European region acquired the maximum share owing to the presence of a majority of the fuel conversion facilities offering high recycling and energy recovery rate from plastic wastes. EU countries such as Germany, Austria, and Switzerland have high plastic recycling rate that drives the companies to develop efficient plastic to fuel conversion technologies. Favorable government support and stringent regulations for clean energy in the region are also some driving factors of the European plastic to fuel market. For instance, EU waste legislation mandates countries to recycle plastic wastes by about 55% by 2025.

However, the Asia-Pacific region is also having a robust plastic to fuel market trend and stood for the second-largest market in 2020. China, India, and Japan are the major countries contributing to the significant share of the APAC plastic to fuel market. The rising urbanization & industrialization along with the favorable government regulations are likely to gain significant impetus for the APAC market during the forecast period from 2021 to 2028.

This section of the report pinpoints various key vendors of the market. Some of the prominent vendors offered in the report include Agilyx Corporation, Alterra Energy, Klean Industries,, Plastic2Oil, Inc., CBS Technologies, Neste, RES Polyflow, Green Envirotec Holdings LLC, and others.

The companies operating in the market are facing stiff competition and thus they get involved in new business strategies to compete in the market. For instance, on November 19, 2020 –Nexus and Shell announced that they have signed a supply agreement to scale up to commercial production of chemicals from plastic waste. The agreement spans four years and 60,000 tonnes of pyrolysis liquid made from plastic waste would be converted into chemical products.

How much was the global Plastic to Fuel market worth in 2020?

The estimated value of global Plastic to Fuel market in 2020 was accounted to be US$233.5Mn.

What will be the projected CAGR for global Plastic to Fuel market during forecast period of 2021 to 2028?

What will be the projected value of the global Plastic to Fuel market by 2028?

Which region held the dominating position in the global Plastic to Fuel market?

What are the current trends and dynamics in the global Plastic to Fuel market?

Huge investments in the plastic-to-fuel conversion technologies, robust demand from efficient management of non-recyclable plastics and favorable regulatory structure are the prominent factors that fuel the growth of global Plastic to Fuel market

Based on technology, pyrolysis segment held the maximum share for Plastic to Fuel market in 2020