Trichlorosilane, with the formula HCl3Si, is a colorless and volatile inorganic compound. It rapidly disintegrates in water and is used to manufacture silicone polymers and hydrochloric acid. In the semiconductor industry, processed trichlorosilane is the primary precursor of ultrapure grade silicon. It is widely employed in the formation of silicon-containing complex chemicals owing to its reactivity and ubiquitous availability. The ongoing development of electronic manufacturing sectors around the world is one of the key factors driving the rise of the trichlorosilane market.

Trichlorosilane is a by product of the polycrystalline silicon manufacturing process. In the electronics industry, polycrystalline silicon is utilized as a raw material to make electronic devices. It is also used in the manufacture of a number of other industrial chemicals. Trichlorosilane is a monomer that is used to make silicone-based adhesives and polymers. 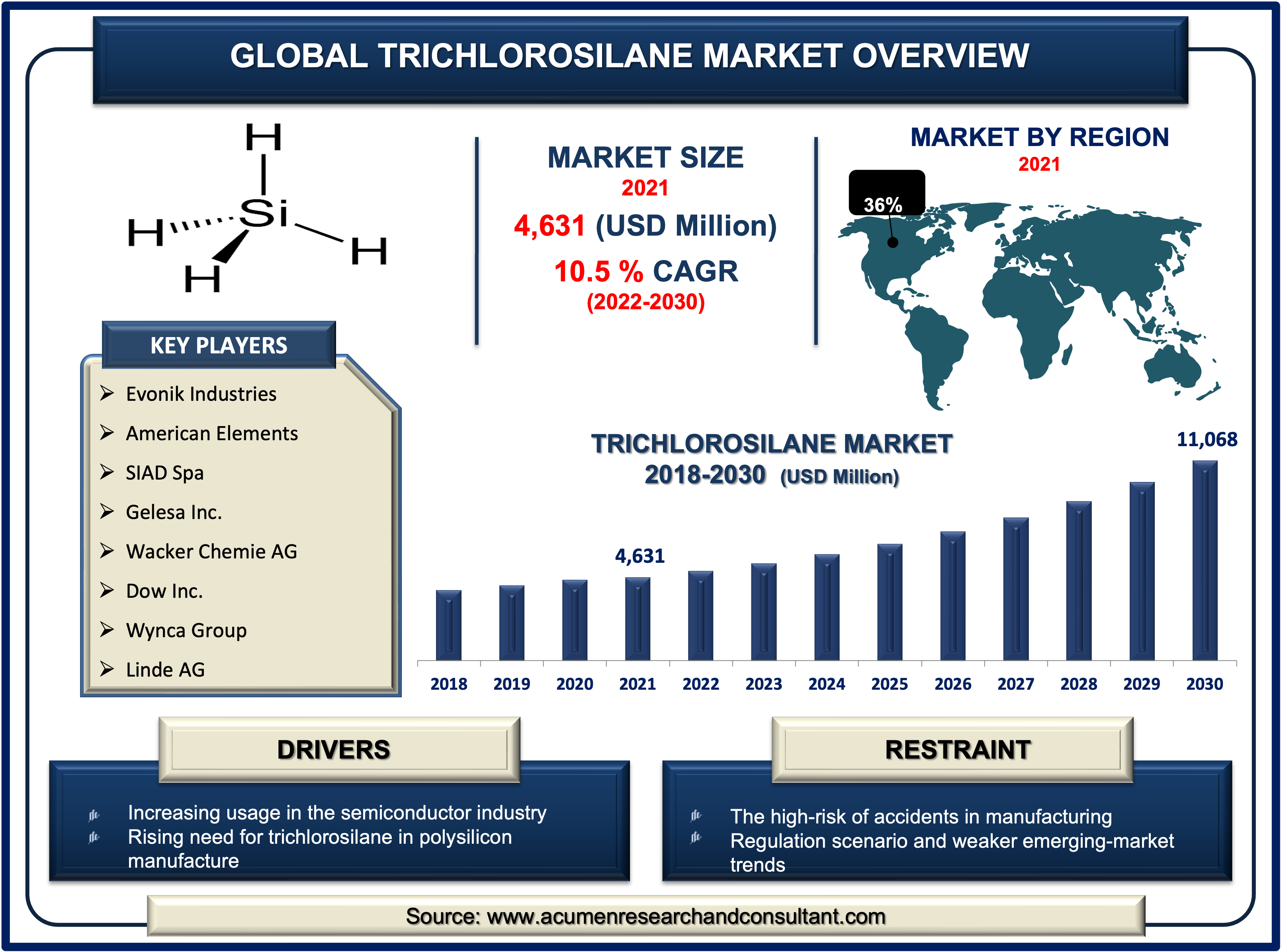 ·         Increasing usage in the semiconductor industry

·         The growing interest in polycrystalline silicon from the power sector

·         The high-risk factor for the incidence of accidents in manufacturing

Growing consumer demand for renewable energy, such as solar energy, will fuel market expansion, as will increased investment by manufacturers in producing technically complex photovoltaic solar cells with higher efficiency. Furthermore, rising consumer spending power, rising urbanization, and increased customer desire for self-owned vehicles may drive up demand for automotive adhesives. The increasing usage of polysilicon production using the Siemens method, in which trichlorosilane is the main constituent, is driving worldwide trichlorosilane market revenue. It is primarily utilized in the production of silicone resins, silane coupling agents, and intermediate materials in the fabrication of polycrystalline silicon, epitaxial wafers, and organic chemical compounds. As the demand for consumer electronics increases, a greater number of complicated and smaller semiconductors will be required. As a result, semiconductor fabrication facilities are being pushed to fulfill increasingly complicated technological nodes, fueling demand for ultra-high grade polysilicon. To achieve the requisite degree of purity, large-scale manufacture of electronic-grade silicon requires a large amount of trichlorosilane.

The global trichlorosilane market segmentation is based on production process, application, and region. 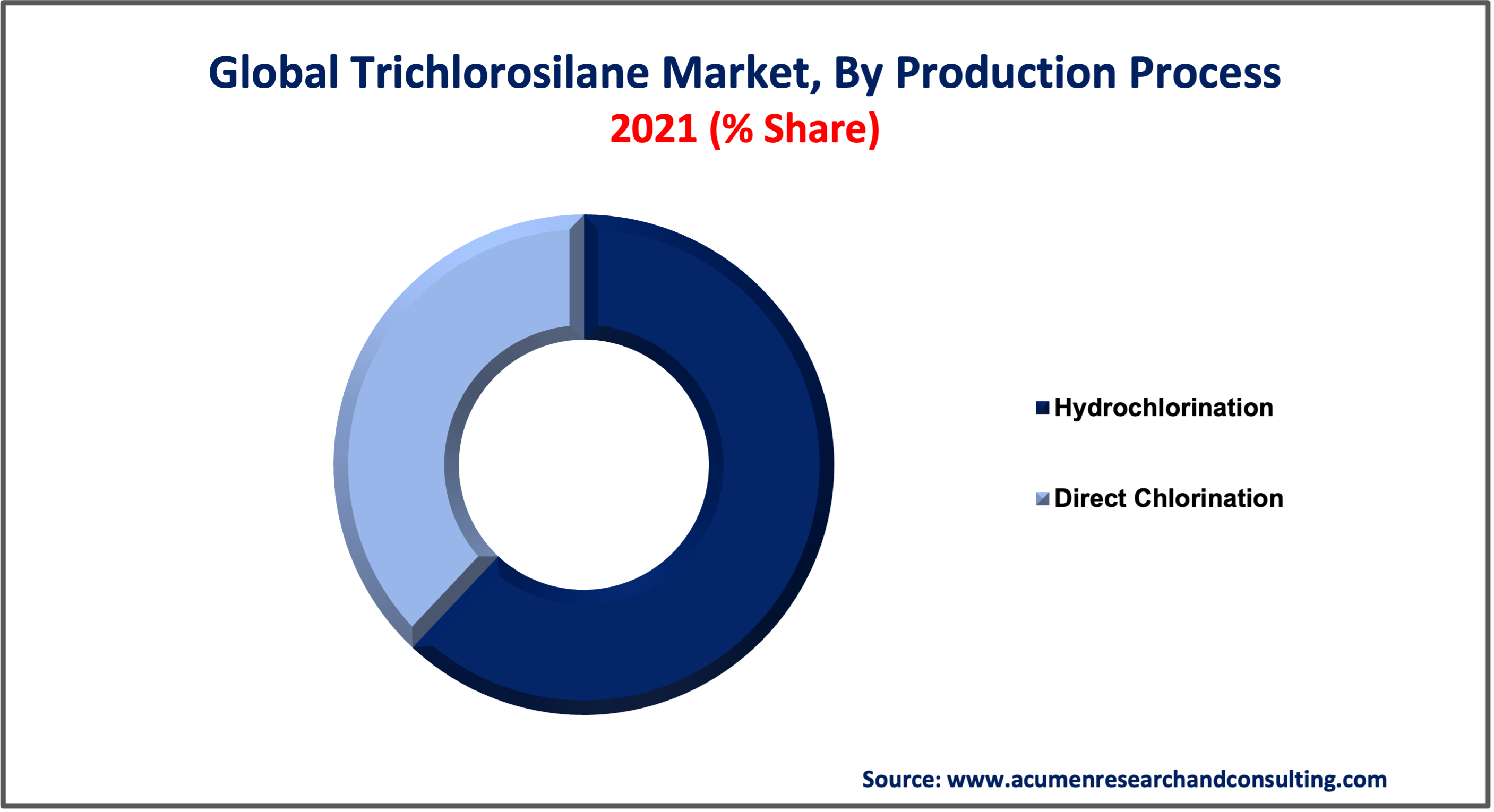 Based on the application, the silane coupling agent segment is expected to account for half of the market share over the projected years. This expansion can be credited to the increasing adoption of silane coupling agents in the building & construction, automobiles & transportation, energy & chemical sectors, and electrical & electronics industries in emerging economies such as China, India, and the Middle East. Silane coupling agents are being used to improve adhesion in paints and coatings. Silanes improve surface strength, UV and thermal stability, chemical resistance, and corrosion resistance. They are primarily utilized to promote adhesion as well as to improve rust and scratch resistance. In automotive, architectural, and marine antifouling coatings, siloxane-epoxy, siloxane-alkyd, and siloxane-acrylic chemistries are utilized to provide lower density, high solids, low VOC, metal adhesion, concrete, or low combustibility, quartz-like surfaces, high heat and UV tolerance.

The North American trichlorosilane market will account for the largest market share in 2021, growing at the fastest CAGR owing to enhanced efforts by solar manufacturers in the region to improve the efficiency of solar cells photovoltaic panels. Growing need of solar equipment, as well as the installation of solar photovoltaic systems on mini-grids to distribute electricity to residential areas on a massive scale, may drive up demand for trichlorosilane from solar applications over the forecast period. Consumer adoption of solar systems is expected to grow as consumers become more aware of the negative environmental effects of rising greenhouse gas emissions generated by the use of conventional energy sources such as coal, petroleum, and natural gas for electricity generation. Trichlorosilane is used in the production of polycrystalline silicon, which has a wide range of applications in the field of renewable energy.  Furthermore, the United States government increased efforts to encourage the use of solar systems through supportive government initiatives such as the Renewable Electricity Production Tax Credit, and the Residences Energy Credit, among others, which are expected to propel market growth.

How much was the estimated value of the global trichlorosilane market in 2021?

The estimated value of global trichlorosilane market in 2021 was accounted to be US$ 4,631 Mn.

What will be the projected CAGR for global trichlorosilane market during forecast period of 2022 to 2030?

Which region held the dominating position in the global trichlorosilane market?

North America held the dominating share for trichlorosilane during the analysis period of 2022 to 2030.

Asia-Pacific region exhibited fastest growing CAGR for trichlorosilane during the analysis period of 2022 to 2030.

What are the current trends and dynamics in the global trichlorosilane market?

Increasing usage in the semiconductor industry, rising need for trichlorosilane in polysilicon manufacture and silane coupling agents for surface treatment and modification are the prominent factors that fuel the growth of global trichlorosilane market.

By segment production process, which sub-segment held the maximum share?

Based on production process, hydrochlorination segment held the maximum share for trichlorosilane market in 2021.